There is one historical figure who really ought to appreciate this blog, and that’s Jesus. Think about it: no single figure has had more trashy, sub-par, C-grade, disposable culture dedicated in His name. Of course, it wasn’t always like this. Christianity used to produce things like the Sistine Chapel and Johnny Cash and Wise Blood, but in more recent decades here in the United States it’s unleashed a garbage island’s worth of shallow, forgettable imitations of popular music, TV shows, video games, etc., etc. It’s not just that Christians have become a demographic to be pandered to and told what their tastes are by our consumption-based society, but that some Christians have declared that they are a demographic apart, segregated by choice from the other decadent, corrupting, and secular demographics. Unfortunately, this has made Christians terrified of secular contamination the golden goose. After all, why should anyone bother producing anything original or, well, good when you’ve got an audience that won’t even look at any alternatives outside their own moral quarantine camp? Let ’em eat the crappy, distaff version of cake!

Now this might sound like an exaggeration, but let’s consider today’s case study, Wisdom Tree, formerly Color Dreams. A maker of mediocre and badly received games like Crystal Mines and Menace Beach (as Wikipedia diplomatically put it, they had a “…reputation for releasing poor games”), Color Dreams renamed itself Wisdom Tree and began making Christian-themed games…mostly by just changing this and adding that to their old unsuccessful games. I don’t want to cast doubt on the sincerity behind whatever caused the people at Wisdom Tree to so drastically change course, but really they had found what was at the time untouched territory: Christian fundamentalist parents and their kids. In fact, virtually all the religious-themed games for the Nintendo were from Wisdom Tree, as the Angry Video Game Nerd’s hilarious series on Nintendo religious games reveals:

I really don’t have much to add to the AVGN’s analysis, except to say his review made me curious about one game, Spiritual Warfare. Like even the Wisdom Tree games that were not dressed up leftovers from their Color Dream days, it was a slapdash rip-off of a popular Nintendo game, in this case The Legend of Zelda. Yet the sources I found agreed that it probably was the best game done by Wisdom Tree – although admittedly that’s like saying being pickpocketed is the best kind of crime to happen to you – and, worse for me, I was genuinely curious how one would go about turning The Legend of Zelda into a video game that would make even Carrie White’s mom say amen. And so I did play Spiritual Warfare, and, lo, it was a very awful game indeed… 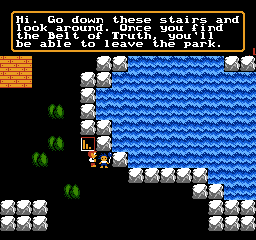 For starters, the game doesn’t even make an effort to disguise the fact that it’s a Zelda clone. There’s a top-down view, stairways leading to dungeons, a landscape divided into single screens, occasional underground side-scrolling parts, the ability to equip two different items or weapons that you use through the A and B buttons, an inventory screen, and items like a raft and a special item that lets you push boulders. Even when you start out, there’s a room where someone (in this case an angel) gives you your first weapon. 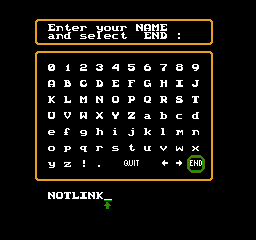 The only big difference is the plot. Instead of taking place in a fantasy world (or ancient Palestine or whatever), Spiritual Warfare is about a modern city where all the people are not Christian and therefore they do nothing but go around trying to kill your character, some random boy God picked because for no other reason than it’s funny to pit a twelve-year old against an entire city of sociopathic atheists.

Your only defense against these God Delusion-reading marauders is…fruit. When you throw the fruit at an enemy, they begin praying and disappear. Sometimes a demon will pop out of them and make a beeline for you, but it moves so slowly it’s never a threat. Okay, I get that it’s a metaphor – in the inventory screen they even say the different fruits represent modesty and patience and whatever – but isn’t it disturbing that you convert people by just hitting them with pieces of fruit? Don’t most Christian arguments about why evil exists in the first place and salvation boil down to free will? Oh well, I guess when you’re evil because you have a demon stuck up your ass free will doesn’t even enter the equation.

You start the game in a park – at least, the game claims it’s a park. It just seems like a random assortment of black spaces and grass that, thanks to the stellar graphics, looks like it stabs through anybody that walks over it. The enemies are guys wearing sunglasses and carrying switchblades, thugs running around with baseball bats (I guess?), and bicyclists who aren’t really out to get you – they just ride back and forth in a demented pattern – but you get to kill…I mean, “save” them anyway.

There’s also this random guy playing basketball. Naturally because this is a Nintendo game my first thought was, “How do I kill this guy?” Sadly I couldn’t find a way to get past the bleachers that inexplicably surround the basketball court. I guess his soul is just damned forever because my character can’t get around some inexplicable bleachers. You can’t even blast your way in with bombs. Okay, they’re not bombs, but “vials of the Wrath of God.” This opinion might surprise you, but they’re not nearly as much fun as the bombs in Legend of Zelda. For one thing, there aren’t even any mountain walls you can try blasting an entrance into. For another, they can blow up boulders but the bicyclist who rode right into the blast radius just started praying, instead of having his little 8-bit head blown off (I’m just repeating the experience of everyone who ever played this game). 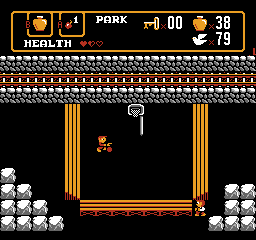 Well, anyway, you also start off right next to what I assume is the first “dungeon.” I use the term “dungeon” loosely because there are no puzzles or mazes, it’s just climbing up and down stairways in a side-scrolling stage and facing off against these slow-moving enemies. There is a boss at the end who you fight for the “Belt of Truth,” the item you need to push boulders, but what the hell the boss is even supposed to be I have no idea. It’s just somebody hiding behind a big garbage bag and shooting demons at you. It’s so easy a fight that it took more effort to kill myself just to see what happens when you die. Naturally, the one thing they don’t steal from The Legend of Zelda is the save feature. Instead the player gets those infamous long passwords that were the bane of many a Nintendo player.

I’ll probably have more to say later (assuming I don’t get so bored with the game I give up on this series), but there’s nothing like playing a badly designed game to make you understand what makes a great game great. In The Legend of Zelda, almost every screen seems like it might a secret stairway or cave hidden under a tree or behind a mountain wall and it’s not long before you’ve got Octorocs spitting stones in front of you and Zolas shooting fireballs from the water on the side. With Spiritual Warfare, most of the screens are empty except for the occasional boulder blocking a path that you just have to blow up – you know there’s nothing hidden because there isn’t even anything it could be hidden behind – and slow-moving enemies that would only pose a threat if you’re a really bad player or if you just get so bored you don’t care whether or not the brat on the screen gets to see his intestines thanks to a knife-wielding thug (which was my case). It’s hard to explain unless you’ve played both games for yourself, but comparing the two makes it obvious that there’s much more to making a fun video game than just filling screens with enemies. You have to make it engaging and fun without making every screen a death trap. It gets depressingly clear very soon what makes Spiritual Warfare the perfect example of the entire species of Christian knock-offs; the body is there, but ironically the spirit is completely missing.

In other words, I’m in for a really boring and pretty crappy ride.