First, a confession:  I cheated a little.

Maybe cheated isn’t the right word, but I did break my own promise to myself that I’d come at this game raw.  I ended up looking at a walkthrough on GameFAQ, to spare myself the horror of trying to find another key.  Luckily, I found out that, in a rare instance of the lazy programming working in my favor, the keys respawn after a fairly short period.  This is a bigger deal than you realize, for reasons I’ll get into below.

For now, though, I want to address something mentioned by Adam, author of the walkthrough, when he said he went ahead and wrote the walkthrough (which to date is the only one on GameFAQs) because he thought Spiritual Warfare was a pretty good game, if only because the – to put it kindly – source material is so good.

I can’t really agree.  After all, here’s a game where the programming is so obviously flawed there’s no rhyme or reason to the way enemies drop items, where characters bleed into the backgrounds like they’re transparent ghosts, and there’s more than a couple of areas where the only way to progress is to suck it up and take damage.  On the other hand, it does at least meet all of the basic criteria for a game, and it is playable.  I’ll admit that on any list of Worst Video Games of All Time Spiritual Warfare should be down from, say, the infamous Plumbers Don’t Wear Ties, which was about as much of a video game as the chapter selection menu on a DVD is  a video game.  But I will say, in defense of Plumbers Don’t Wear Ties, it did give us this:

As for Spiritual Warfare, I think you can make a defense that it isn’t bad, but at the same time…if you want to play it, there’s just no reason not to play Legend of Zelda instead.

Anyway, the last time we joined NotLink for his adventures in Dawkinsville, he was frustrated by coming to a locked door without a key after having to run through a hurricane of bullets.  Now I know that doesn’t seem like a big deal, especially if you’re going through a Zelda model, but of course in Wisdom Tree fashion this game takes a simple idea and turns it into another lash on the cat-o’-nine-tails.  Keys are few and far in between in this game, and they’re not at all contingent on the area you happen to be exploring.  Let me explain:  in Legend of Zelda, while late in the game you did have the option to buy keys and you could use different keys in different labyrinths, for the most part you were expected to be able to use the same keys in the same labyrinth.  Not so in Spiritual Welfare, where for example there’s a key but no locked door in the Airport area, while there’s a locked door but no key in the Warehouse area.   So obviously you can’t rely on finding a key to that locked door you came across anywhere nearby.  Here’s a pro-tip:  exploit the hell out of the key respawning thing and just grab two or three keys from the same room.  As an ancillary to that, here’s another pro-tip:  play a Zelda game, or just about any other game, instead. 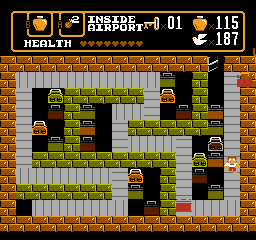 Okay, I have to give credit where it’s due.  When I went back to the airport to get a respawned key, I did notice that there’s an area in the Airport where you can get a heart container by climbing into the airport baggage carousel.  Even here it’s a little buggy – it’s pretty obvious the programmer or programmers didn’t know how or didn’t want to bother with making the conveyor belts actually work against the player’s own movements – but it’s actually a pretty clever way to hide a bonus item in a game that takes place in a modern setting.  Another thing I noticed is that you can heal without the use of items or going through those annoying Bible quizzes.  There’s an option on the menu for “Prayer,” which lets you heal at the expense of your “spirit” – those dove thingies that are the game’s equivalent of Rupees.  It does raise the theological question of why God is sending you out to face flying demons and toughs armed with guns that shoot bullets as big as the human body, and you still have to beg him not to let you die…yet it is a decent game mechanic that actually uses the game’s Christian motif in an original way, rather than slaps it over something else.

But what Spiritual Warfare giveth, Spiritual Warfare taketh away.  Hence the forklift drivers that want you dead, who are such hardcore atheists they can’t be converted.  Also they’re pretty fast, they move at random, they can move blocks around allowing them to block your path of escape, and they attack you in the narrowest spaces possible.  Now I’ll admit I’m not as good a video game player as I was back when I was 13, but I hope this helps you understand why my life is so low in so many of these screenshots.

Also for a while now I’ve been noticing that the game has its equivalent of the teleporting whistle from The Legend of Zelda:  train stations.  Try to use them and you’ll be told you need a ticket.  Admittedly I haven’t really been putting my whole ass into this game (although as you may have noticed I’ve been finding the heart containers alright, but honestly they’re easier to find than they were in any of the Zelda games I’ve played), but I’m pretty sure I haven’t overlooked it.  So here’s a prophecy:  it will turn up near the end of the game, when the ability to teleport to the game’s different regions will no longer be useful. God help me, I have become psychically attuned to this game. 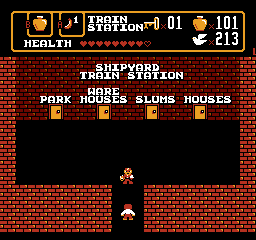 Even the Bible quizzes, which just inherently sucked to begin with, are getting worse. 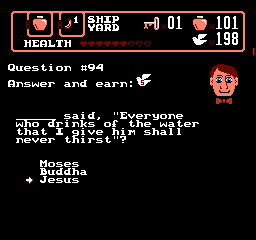 Yeah, I’m playing a crappy Christian video game;  the answer could totally be one of the guys from the other major world religions!

But I didn’t know then that NotLink was in for another crappy, overly difficult boss fight.  For, in fact, that’s what was behind the sealed door in the Warehouse.  Like most of the other boss fights, there’s a puzzle element:  here you run at the bottom of the screen while the boss runs in and out of the room and fires  heat seeking bullet-bomb things (really) at you.  When the bullet-bomb thing is fired, one or two sections of the wall separating you from the boss will glow purple.  You’re supposed to run to a spot under that brick, so that the bullet-bomb will hit it and explode.  When part of the wall is blasted away, it reveals ladders that you can eventually use to climb up to where the boss is.  While where the boss fires the bullet-bomb and where the bullet-bomb lands is determined by where you’re standing, where the bricks glow is completely random.  This means that sometimes a section of the wall will glow near the top of the wall where it’s literally impossible to get the bullet-bomb to go, and it will glow there, in the exact same spot, four times in a row.  Worse if you’re running to catch a glowing section on the far left of the screen or just trying to dodge one of the bullet-bombs, it’s really easy to accidentally go through the door and leave the boss room, which means you’ll have to start over again completely…and, yes, it happened to me.  Weirdest and most frustrating of all, you can blast some of the bricks with your own bombs to clear a path, but you’re not given any indication of which ones.  The game only lets you know when enough of the wall has been cleared that you can blast the rest of the path away with your own bombs by the fact that the boss just doesn’t show up again.  That’s nice of him.

So, in sum, what starts out as a puzzle-based boss fight quickly turns into a test of patience based on pure luck.

Also, as with all the other boss fights, there’s an angel right through the door.  What, so it was the angel who was shooting heat-seeking missiles at me?  I don’t remember any biblical patriarchs or apostles having their faith tested that way.  “Peter, thy faith shall be tested, by me running back and forth above you, and firing magic explosives that shall follow the heat of your flesh, and you must lure the explosives toward the bricks that glow.”  -John 22:3-4.

Well, whatever sadistic plan the angels had in mind (as if Bible quizzes for NotLink’s right not to die horribly was not enough), I did get the Boots that let me walk over the lava spilling out onto the streets of Dawkinsville.  Conveniently enough, one such nightmare street linked the Warehouse to a new area, creatively titled Hotels.  To be honest, this is my favorite part of the game so far.  For starters, it’s not a maze of madness and despair like the Warehouse zone.   For another, NotLink and every enemy with any red on them in the region looks more maroon than they did elsewhere in the game. It’s not bad programming, it’s a deliberate aesthetic choice!  And finally, it just featured this building: 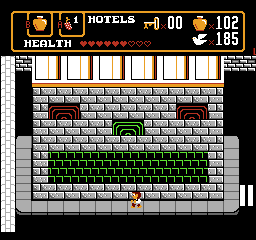 If this building doesn’t show up as the game’s final boss, I’ll be disappointed…well, more than I already am.  Also the game tries to help God pull an Old Testament on you all over again, but I’ve learned my lesson.  Enjoy Hell, casino goers!  God’s okay with me getting shot at, but not okay with me going anywhere where there’s drinking or gambling no matter how many souls I can save by slapping them with fruit.

There really wasn’t much to this area, sadly, except I did uncover the best weapon in the game:  the banana.  It actually reaches across the room, unlike any other weapon in the game.   How convenient…and it means I’m nearing the end of the game!

I don’t get why it’s the banana, though.  Unless…

I guess the banana is so much the “atheist’s nightmare” that it just literally flies across the room, whacks atheists in the face (in a totally non-sexual way, of course), and turns them into evangelicals immediately.  It all makes sense now, especially if it turns out this game was in fact programmed by Kirk Cameron.