Except for the occasional RPG, the 8-bit/16-bit era in North America isn’t normally seen as a time rich with proof that video games are a valid storytelling medium.  Part of this is admittedly because of technological limitations, but there was also Nintendo’s draconian censorship policies.  If not for that, then we might have seen some more unique games that would have shown that the NES was capable of much more than paper-thin stories about Italian plumbers rescuing princesses from demonic turtle-people, like Sweet Home. 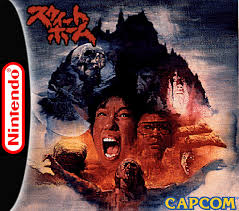 Years before Resident Evil and Silent Hill made interactive horror sagas a staple, there was Sweet Home, a haunted house yarn from Capcom that took some traditional RPG elements but made something very new and unique, especially in the context of 1989.  The story begins right away with five researchers entering the isolated and long abandoned mansion of Ichiro Mamiya, a famous artist who disappeared many years ago after the death of his wife. Their goal is to find and recover the rumored lost frescoes Ichiro painted shortly before his disappearance, but soon after entering their mansion the main entrance is suddenly sealed and they are threatened by a woman’s ghost, turning their simple search into a mission for survival.

At a glance, Sweet Home plays like a typical RPG of its time;  you fight zombies and monsters in a turn-based battle system, you explore the sprawling mansion with an overhead view, and you even gain levels.  However, it isn’t long until you start to see that the various traps the mansion has in store for you, from broken glass to falling chandeliers to ghosts that can teleport members of your party to other parts of the mansion, which are more dangerous than even encounters with monsters.

Sweet Home also demands a level of strategy that you wouldn’t see in something like Dragon Quest.  In a nod to one of the oldest horror movie cliches of all time, the game forces your party to split up.  You can call the other members of your party to you during combat, but otherwise you have to manage who is in what party and plan out how their various abilities can be used during exploration the mansion.  Each of the five researchers has a different ability that you will need – one can find clues in the frescoes scattered throughout the mansion through photography, one can vacuum up broken glass, one is armed with a lighter, another can unlock doors, and finally you have a party member who is a nurse and can treat wounds – but unfortunately… 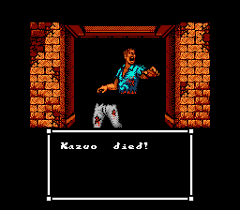 If anybody dies, they die for good!  The game does have a small mercy by giving you replacement items for your character’s lost ability or special item, but it’s still a blow.  Worse, while it is possible to get through the game with everyone surviving, it’s not easy, and most playthroughs made without the benefit of a walkthrough will see one or two fatalities, at least.  Also don’t think the game gives you an empty bedroom or someplace where your characters can rest and restore your Health Points.  Like many of today’s survival horror games, the game only leaves you a finite number of healing items scattered throughout, so it’s up to you to ration your supplies.  In other words, it’s about as close to the experience of actually being trapped in a mansion full of murderous ghosts and undead as the Nintendo can recreate.

If I made it sound like the game is really challenging, well…it is, but never unfairly so.  It just demands more thought from the player than just the “So I need to make sure I have this many healing items and that my levels are this high” planning typical of 8-bit RPGs.  Then there’s the story itself, which takes some truly dark and tragic turns worthy of the more “sophisticated” games of the present day.  You won’t be surprised at why Nintendo never let this game reach US shores.

The game was actually released simultaneously with a TV movie adaptation, which happens to be up on YouTube.  It’s not…bad, but the game certainly comes across as the more engaging and unique experience, so it’s better to just experience the story that way.  Even if you’re just a casual gamer or you’re not really all that into retro games, give Sweet Home a try.  Even with changing technology, it still stands out as one of the best horror video games ever made.  You can find a fan translation of the game here.