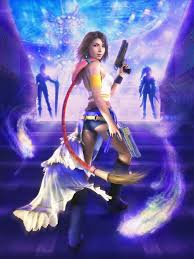 At last, we come to the first direct sequel in the franchise’s history (well, unless you count the obscure anime Final Fantasy: Legend of the Crystals…), Final Fantasy X-2 or, as I like to call it, Fanservice: The RPG.

Taking place two years after the events of X, we find that Yuna and Rikku have teamed up with an ex-soldier named Paine to become “Sphere Hunters,” treasure hunters who specialize in finding spheres, which store the memories of  people from the past and even have the potential of granting users those people’s training and skills.  Yuna’s drastic change in occupation is motivated by her quest to find “him,” despite his disappearance at the end of X, but her mission becomes much more than personal when Yuna, Rikku, and Paine are caught up in an escalating conflict that may lead to a civil war, and stumble across information about an ancient tragedy that might very well have repercussions that will cause the total destruction of Spira.

X-2 is, in one word, bizarre.  It’s a complete tonal shift from X, opening with a now infamous cutscene showing Yuna performing in a fancy JPop concert:

While there are mature and even dark elements that surface, although usually late in the game, for the most part X-2 is a light-hearted adventure story with almost none of the pathos that defined X – or, really, the entire series as far back as II.  It isn’t just because the game has a team of three women as protagonists that the game has an obvious Charlie’s Angels motif.  Even the game’s (apparent) antagonist, a rival sphere hunter, Leblanc, is treated more like an excuse for constant comic relief rather than an actual threat.

The weirdness seeps even into the structure of the game itself.  Unusually for a J-RPG, much less for a Final Fantasy installment, the game is more or less a wideopen sandbox.  In complete contradiction to series tradition, you start the game with an airship, although in one of the game’s “minor” yet more noticeable flaws flying it is represented by just selecting a destination on a static screen.  You have a set number of missions you can go on, and accomplishing certain ones will open up further missions.  Depending on your point of view, this is either a refreshingly open-ended RPG experience or it means a J-RPG where most of the game is made out of sidequests and mini-games.  There is a plot to the game, and it does turn out to have depth especially once the forgotten tragedy underlying the game’s story comes to light, but it doesn’t really become all that evident until after quite a bit of padding.  So even though the game’s story does hit some right notes, it still comes across as unusually shallow for a franchise famous for pioneering storytelling in console RPGs.

This is almost tragic, mostly for two reasons.  First off, X-2 is not only one of only (now) three games in the series to have a female protagonist, but the only one where all the playable protagonists are female.  Now for some this element might be watered out, if not negated totally, by just how stuffed full of blatant fanservice this game is;  not just with the skimpy clothing of the female leads (especially Rikku who, let’s remember, is supposed to be sixteen at the oldest!), but scenes like the three heroines having a water fight in a hot spring while wearing bikinis and a mini-game where you basically massage a woman into what’s implied to be an orgasm.  Plus there’s the more subtle fact that Yuna’s entire initial motivation in this game isn’t self-sacrifice like in X, but to try and find the guy she loves.  I’m not saying that this in of itself should be considered offensive – in fact, you could see it as a nice gender-reversal of the age-old “Save the princess” storyline – but it is a disappointing contrast to Yuna’s complex and tragic motivations in X – or, indeed, the treatment of the franchise’s first female protagonist in VI, Terra, who didn’t even have a male love interest.

Second, X-2 does have fantastic gameplay;  I’d even say it has some of the best in the whole series. Instead of the sphere grid system from X, the game simply revives the traditional leveling system.  The job system from V is once again brought back and used in a way that’s simple to learn but opens up a pretty complex potential for strategy.  It’s also the first time in a long time we’ve seen it possible to customize the abilities of the playable characters so much,a refreshing change.  It’s just a shame that it’s not in service to a much deeper – and better – story.