1)  I never played it, so that alone defeats the point of including it in a retrospective.

2)  I dislike MMORPGs strongly enough I probably never will play it.

3)  I loathe  the idea that MMORPGs can be passed off as regular installments in a main series, no matter how hard Square-Enix pushes it, so even if I did play them I’d probably ignore it just for the sake of making a point. 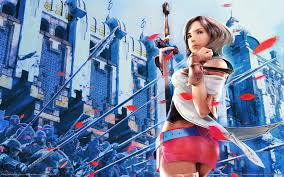 So, let’s skip ahead to the next real installment in the series, shall we?

Like IX, XII is one of the Final Fantasies that fell through the cracks, in no small part because Square-Enix in all of their wisdom was already hyping XIII.  Again, like with IX, this is really a shame, because XII is easily the strongest installment the series has seen after the days of the original Playstation.   It also improves on the series in ways that, unfortunately, don’t seem like they’re going to stick, which is really a shame because I am honestly convinced that XII offers one of the better blueprints out there on how to upgrade console RPGs for an era when video games seem to be on the brink of becoming as complex as possible.  I do also think XII is flawed, in ways that are difficult to ignore even if you admire the game’s strengths, but not enough to truly undermine the game’s story and its reforms to the series and the genre as a whole.

The first thing that’s remarkable about XII is just how…authentic the world it takes place in feels. Its setting is Ivalice, a world already established in Final Fantasy Tactics and Vagrant Story.  There the small desert kingdoms of Dalmasca and Nabradia have served as buffer states between the empires of Archadia and Rozarria, until the son of Archadia’s Emperor, Vayne Solidor, prepares for an all-or-nothing war against Rozarria by instigating the violent annexation of both Nabradia and Dalmasca.  A mysterious catastrophe of supernatural origin completely wipes out the former and leaves behind a haunted wasteland, while the latter is turned into an imperial province despite widespread resistance from the population.  Under the alias of “Ashe,” the young rightful queen of Dalmasca falls in with two youths orphaned by the invasion of Dalmasca, a pair of sky pirates, and a disgraced Dalmascan knight.  With their help, she seeks out the legendary Sun-cryst, a source of magical power once used many centuries ago by Ashe’s ancestor, the Dynast-king, to create a continent-spanning empire.  Unknown to her, however, both she and Vayne Solidor are pawns in a sprawling game played by god-like beings who have orchestrated events in Ivalice since the dawn of history…

As you can hopefully tell from my summary, Final Fantasy XII has a story with an ambitious historical scope.  True, the standard high-fantasy elements of magic and monsters and airships are all there, but honestly they’re incidental to the story.  The Final Fantasy series has never been known for aspiring toward geopolitical complexity, so for its story alone XII is a welcome change.  And the game simply loves to offer the player details about Ivalice’s history and legends.  It’s also a change of pace that, instead of a globe-spanning struggle to save the world, your quest encompasses only a small region of a much wider world and at its heart involves a small country’s struggle for independence and survival.  Even the game’s cities, which are vast and populated by far more NPCs than just ones that give your party valuable information, feel more tangible.

While it took me a while to warm up to it and even it was no substitute for the option of controlling all your party members directly, I did end up appreciating the game’s Gambit system almost as much.  Gambits are specific “instructions” that one can equip your party members with that dictate their actions in battle (for instance, one Gambit is to use a healing spell or item if a party member’s health dips below 25%).  It adds a whole new dimension of strategy to battles and offers a clean solution to the problem of how to stay true to the genre’s roots while offering new and more kinetic approaches to battle systems than just imputing commands on a static screen.  There were still some kinks – among them that summoned monsters, even the allegedly powerful ones that can be recruited in the game’s most difficult side quests, are never that useful – but overall it was a successful experiment.  Also the fact that battles don’t take place in a separate “mode” is also a simple but daring break from RPG orthodoxy that pays off, so much so that it’s actually shocking that it wasn’t implemented in XIII (but we’ll get to that, I promise you).

But perhaps what I loved most about the gameplay here is the mission system.  You have the option to take on a series of side quests as basically a monster hunter, which leads you to whole regions of the game that you wouldn’t otherwise explore if you just stick to the main story.  The side quests are challenging without feeling impossible, they open up even more information about Ivalice’s rich history and folklore, and they offer the player a great way to raise experience and cash without having to mindlessly grind for hours.  Such a side quest system is one of those things that sounds inherently great but it can be done very badly (see Dragon Quest IX), but Final Fantasy XII makes the side quests diverse and interesting enough that it adds to the experience without feeling like just busy work the programmers saddled the player with to fill time (again, see Dragon Quest IX).

Now before I gush too much, I have to admit there were flaws that, while not ruining the game for me, did aggravate me greatly and really keeps the game from reaching the same levels of quality as IX, much less the series’ “Golden Age.”  As much as I love the story, I have to ask the same question so many fans asked:  why the hell is Vaan the main protagonist?  It makes even less sense than Tidus;  at least he fulfilled an important narrative function as the outsider who has to learn about the new world he’s found himself in, and it turns out – albeit late in the game – he is part of the backstory.  Vaan is just an orphan whose brother died in the invasion of his home country;  really you could excise him from the game completely and nothing is lost.  In fact, Vaan wasn’t originally supposed to be the protagonist, but he was made so relatively late in the development process for – of course – idiotic marketing reasons.  It doesn’t completely derail the story, but you will keep asking yourself why the tragic knight famed for treason against his monarch, or the queen who lost her throne and her beloved fiancee to an invading empire and finds herself almost consumed with the desire for revenge, or the charismatic, swashbuckling sky pirate aren’t the protagonist instead.

Then there’s one massive issue with the gameplay, one that will haunt you throughout the entire game, especially if you’re a completist.  Many times the treasure chests randomly spawn their contents.  So it’s possible that the treasure chest that just offers up a Potion or something even more useless actually has a valuable piece of equipment, but there’s only a 1/20 or even a 1/50 chance that you’ll get it.  Sure, there are items you can equip that increase your chances of getting something valuable, but who the hell thought this was a good idea in the first place?  And that’s not even the half of it.  There are two ways to get the game’s most powerful weapon, the Zodiac Spear.  First, you have to not pick up certain treasures located in certain locations and not be equipped with the items that make it more likely to find better loot in the chests once you reach the Spear’s chest, which is in an optional location you can’t reach until about halfway through the game.  Or, alternatively, you can find it in a chest late in the game…except that there’s only a 0.1 percent chance you can get the weapon from the chest.  It’s impossible that they designed this on purpose unless they just assumed players will go through the game with a guide in their lap, or it’s some sick torture of completists.

Baffling and frustratingly unnecessary missteps aside, I can’t help but admire the game’s attention to detail and the ways it tried to breathe new life in the console RPG formula without completely tossing away the basics.  Fans of the series will learn just how valuable this is, as the next series of the installment, the much anticipated Final Fantasy XIII, will reveal what can go wrong when you do try to again reinvent the wheel.