And thus, after too long an absence, we return to the horrifying world of Castlevania…

-…coming out of the alley like two gravestones with arms, legs, and bad attitudes shambled two ghouls.  They hissed harshly, opening mouths filled with sharp teeth.  Long claws reached out to rend and tear at their victims.

Honestly, the real horror comes from this passage, where Simon comes across as a drug addict after he kills a ghoul and absorbed its power, or something:

The whole creature shook.  Then, with a bright shimmer, it seemed to wrench away from existence, as though some kind of hook had come out of nowhere and dragged it into a black hole, leaving only its outline behind.  The outline turned to a dazzle that glittered over Simon Belmont like faerie dust.  Simon shivered, and his eyes got wide for a moment…And then he recoiled his whip around his hand and nodded toward Tim.  “Ah, yes.  Energy!  Already I feel recharged with vigor!  I am ready for another!”

I have to admit, I do like the idea of video game characters getting a drug-like rush from power-ups.  However, even here the pedantic nerd that lives in the core of my very being pipes up.  Again, defeated enemies in Castlevania II drop Hearts, which are used as the game’s currency, while health is restored by eating pork chops (which are for some reason often found in walls by breaking bricks with your whip, but the Belmonts aren’t picky eaters).   You definitely don’t get revitalized by addictive faerie dust left behind by vanishing zombies, who, by the way, in the game more like burst into flames when they’re defeated than vanish into another dimension.   I know that there are weird things stemming from video game logic that would be difficult if not impossible to translate to the page, but that doesn’t mean you should make up even more random, surreal things to take their place!

“Linda!”  said Simon Belmont.  “My wonderful and beautiful Linda Entwhistle!  You were correct.  At night, the signs can become portals into the dimension where you are imprisoned.” Linda Entwhistle smiled understandingly at her beloved.  “I should think that’s obvious, darling.”

Did she just imply that she thinks Simon is a twit?  Actually, she does.  Linda has been imprisoned by Dracula in “another dimension” and while she (somehow) knows the locations of all of Dracula’s body parts the curse that imprisons her prevents her from imparting that information, so she has to tell him indirectly through riddles.  Simon protests that he’s not good at that kind of thing, and Linda agrees and admits that’s why she told Simon to get help from Tim.  I’ve heard of people with significant others who underestimated their intelligence or other qualities, but not to the point where they thought they needed help from a middle schooler from another universe.   This is a relationship that will require some counseling.

However, I will give F.X. Nine this.  Castlevania II was notorious for how its NPCs would give misleading or flat-out false information, so much so that the instruction manual warns the player about this.  Even so, the implication in the game is that it’s because Simon Belmont is resented by the people of Castlevania because he carries Dracula’s curse with him (one character actually says, “You never should have come back to Castlevania”), which really would have made for a much more interesting story – and one that could still be kid-friendly – than “His girlfriend is trapped in a magic dimension and can’t give direct advice, because a <strike>wizard</strike> vampire did it.”

“What you need can be found,” said Linda Entwhistle, “where love is joined and Sundays sound.”

I’ll spare you the five seconds it should probably take to work this one out:  it’s a church.

Okay, I get that you wanted a riddle even your target audience could figure out, although not at the expense of making the hero look like a moron.  I know that’s not easy to do, but come on.  You’re making us yearn for the brilliance and heroic abilities of this Simon. 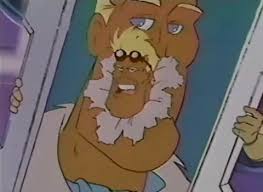 Anyway, at the church – which happens to be the only one in their entire world/universe/whatever – they meet a monk who gives them information on the location of Dracula’s rib (hmmm, rib) and thorn whips.  Apparently Simon doesn’t know better than to give the likes of Tim a lethal weapon.  But to his credit he does seem to be getting as tired of Tim’s antics and quips as I already am:

“This shall be one of my missions on this quest,” said Simon.  “I shall make you a more serious young man.”

Because I know that, when I was the target age for this book, I would have been much more interested in the character development of some kid than in a mission to go to various macabre locales to collect the body parts of a vampire lord!