As a cultural anarchist who genuinely doesn’t believe that there’s anything substantial that makes, say, Thomas Pynchon “better” than Stephen King, I’ve made some statements that have gotten me weird, if not hostile, looks.  One of them is my sincere declaration that The Golden Girls was revolutionary television.  How dare I say such things about a mere sitcom?  And if it is possible for a sitcom to be “revolutionary,” it’s usually for envelope pushing and delving into the taboo, like with Married…With Children.

And yet, can you imagine even today a sitcom deal with post-menopausal women talking about sex – and talking about seeking and enjoying it, natch – so casually?  Maybe that’s not so surprising, precisely because The Golden Girls had the impact it had, but just try to imagine how Chuck Lorre would address the topic and maybe you can appreciate how The Golden Girls was ahead of its time – and perhaps even ahead of our time as well.

“Rose the Prude” is the episode I would say is when the show hits its stride, the first one to hit a rhythm suiting its medium and to try to convey an issue that would be difficult to address in a feature length film, much less a half-hour show.  Rose is going on a cruise to the Bahamas with her boyfriend Artie (played by the late Harold Gould, who in later seasons would, confusingly, play Rose’s long-time boyfriend Miles), but she’s worried because Artie would be her first lover since the death of her husband – and because her husband died from a heart attack in the middle of coitus.  (There’s a really slight b-plot too, involving Dorothy boycotting her own games of gin rummy with Sophia until she realizes that chatting over the cards is how they catch up on family gossip.  It’s an early illustration of how natural Bea Arthur and Estelle Getty are together, but not much else). 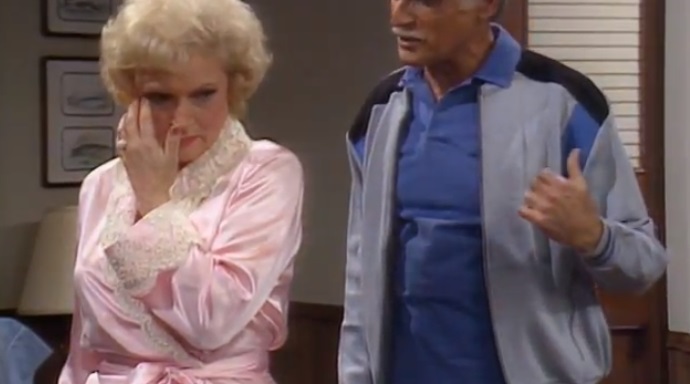 I imagine that this plot might have not worked as well in later seasons, when Rose is Flanderized from a naive ditz to a…well, to put it nicely, someone who seemed to have a fundamentally different form of consciousness.  Here Rose just comes across as someone who is relatively conservative but still open to new experiences and relationships.  She doesn’t really feel like she’s betraying her dead husband, or that her boyfriend will be killed by the power of her libido, but she can’t help but be held back by the fact that she spent decades taking her marriage – and the concept of monogamy itself, really – very seriously and by a strong association between the act of sex and her husband’s life, as well as his death.  The moral might like most sitcom morals be too pat (although “Would your deceased spouse want you to be trapped in miserable celibacy until your own death?” is a cliche exactly because it is an excellent point), but the problem is one that’s handled deftly without hammering in the sorrow and the pity (something that, unfortunately, can’t be said for how the show will deal with Important Issues in the future).

“Back off, Blanche.  Not all of us are classified by the Navy as a friendly port.”  -Unless I’m forgetting something from the pilot and the first episode, I do believe this is the first of many, many “Blanche is a slut” jokes.

“WHO CARES, ROSE?!  DID YOU AND ARNIE HIT THE SHEETS OR NOT?”

Rose’s husband Charlie died of a heart attack during sex, something that gets revisited again.