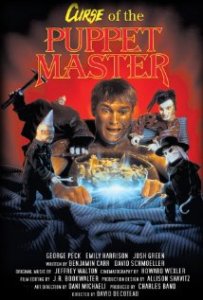 I will at least admit that this film has the best cover of the series. It’s creepy, it’s unexpected, and it’s actually relevant to what happens in the movie!

The film itself…well, it has a rep for being the “beginning of the end” for the series. And it did come out in the late ’90s, when Charles Band’s media empire was beginning to slip off of its mom-and-pop rental store throne. The very fact that Curse of the Puppet Master itself wasn’t supposed to be – originally the plan was for a trilogy of films where the Puppets face off against the classic Universal monsters, but presumably that proved too ambitious for Full Moon’s dwindling resources – is a testimony to Full Moon starting to be, well, eclipsed in this era.

It’s also true that the puppetry in this film, no longer handled by David Allen Productions, just isn’t nearly as good as it had been. The puppets’ movements no longer look fluid, with one scene where Tunneler and Blade are supposed to be walking looking like they’re levitating across the room. Also when Blade kills shots of him unconvincingly slashing at the air are just interspersed with shots of his victim struggling and showing facial wounds. Perhaps it wouldn’t have been so bad if they didn’t play the same trick twice in the movie.

And yet, it’s really not that bad…

I mean, okay, the movie’s plot is best described as a cliche casserole, combining the Instant Love Interest/Sex Partner, Inexplicable 20-Something Bullies, and even thunderstorms taking place during the movie’s first kill and the climax. But honestly the way it uses the core concept of little killer puppets and its antagonist is pretty interesting, more so than their purely heroic (and baffling) turn in 4 and 5.

The puppets end up in the care of Professor Magrew and his daughter Jane, who operate a puppet museum/show. In true Puppet Master tradition, there’s no explanation as to how the Puppets got there, except that Magrew found them at an auction. Prof. Magrew’s last assistant Matt mysteriously vanished – or so he tells the obviously corrupt local sheriff, but in reality he was the victim of Magrew’s so far failed experiments to transfer a human’s consciousness fully into a new puppet. Poor oblivious Robert, a gas station attendant who is for some reason constantly tormented by said 20-Something Bullies, is enlisted by Magrew as his new assistant when Magrew discovers that he has a knack for woodcarving. Robert, who moves in with the Magrews (and promptly has sex with Jane; how rude!), is not really taken aback when Magrew introduces him to the Puppets. A bit more worrying to him than sentient puppets with obvious means to kill are the dreams Robert starts having of turning into a puppet himself. 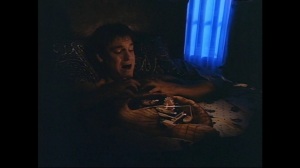 (Wait, you ask yourself, did Prof. Magrew learn how to create new puppets using human minds from Toulon’s research? Were Toulon’s notes auctioned off too? If so, does that mean the existence of living, sentient puppets is kind of public knowledge, which is why Robert isn’t really freaking out over this? But anyway the transference of a human mind or soul or whatever to a new puppet isn’t anything like what happens in III. So how did Prof. Magrew figure it out? Was his doctorate in occult puppetry? Did he also find Sutek, or at least communicated Sutek before he got killed in 5?  But what happened to Rick anyway? Did he just auction off the puppets? What an asshole! Or maybe this movie takes place after II, in which case, whatever happened to Camille? And speaking of that, Leech Woman is back, even though she was thoroughly destroyed in II! But whatever happened to Torch? And plus..)

[For consideration of these questions and more, please refer to my upcoming book, “Hand Inside the Puppet Head: The (Dis)Continuities of the Puppet Master Series,” from Oxford University Press.]

Because the main plot doesn’t allow for many warm bodies to slice up and drill into, Robert and Jane have a violent run-in with the 20-Something Bullies, whose leader retaliates by breaking into the Magrew house and attempting to rape Jane, until Pinhead drives him off. Magrew manages to follow the bully leader in his truck (even though the leader had too much of a lead in his car, but that’s the least of this movie’s logic holes) and sics Blade and Tunneler on him.

Jane later admits to her father that she’s fallen in love with Robert. This leads into one of my favorite moments, as Magrew tries to explain why she shouldn’t delve into her new relationship without coming clean. He says, in perhaps one of the most awkward conversations a father can have with a daughter, “If he were to leave…I’m just trying to say…I’m trying to say I don’t want you to get attached to him. Like if I were to…murder him for some occult purpose…or some similar scenario.” (Okay, I made that last part up, but the rest is real!).

The sheriff, already suspicious of Magrew, finds out that the bully leader wanted to attack Jane and goes to confront the professor. Unfortunately, that goes about as well as expected, especially because Magrew has sent Jane off on a pretext and is going about his plans to put Robert’s consciousness into the puppet Robert has been working on. 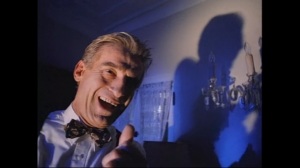 So the film is admirably downbeat. Professor Magrew turns out to be pretty much insane, believing that he can engineer a new species that will be free from humanity’s more animalistic impulses, and convinced that he’s doing Robert quite a favor. Magrew even succeeds in transferring Robert’s essence into the new puppet body, but the Puppets immediately turn on a disbelieving Magrew (disbelieving probably because he too is wondering why they waited until after it was too late to save Robert to mutiny or, hell, why they didn’t betray him after what he did to his last assistant), and Jane arrives just in time…to see her father hacked up by Blade and then ruthlessly finished off by Robert, the man she fell in love with, despite her pleas. 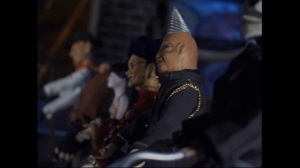 This might sound like watching this franchise has finally broken me and turned me mad like poor Professor Magrew, or that my expectations have gotten even lower, but honestly the film’s villain and conflict are pretty well thought-out elements. Predictable as the plot is, there are hints dropped in the dialogue, particularly when Magrew and Robert have a heart-to-heart about the 20-Something Bullies and Magrew remarks that people always seem to be more animal than angel, about Magrew’s deranged philosophy. There’s also a good but easy to miss moment that speaks well of the acting chops of George Peck, who played Professor Magrew. As Blade hacks away at the sheriff, Magrew is laughing with delight – but then, slowly, he closes his eyes and bows his head, as if praying for forgiveness. That one scene suggested as much about Magrew’s motives as any of his dialogue, and was a small part that was genuinely…dare I say it?…really smart.

Also, intentional or not, it’s interesting how much Magrew fails in this movie, even when he wins. Sure, he essentially “killed” Robert and reduced him to a puppet, like he planned. However, it is puppet-Robert, the supposed culmination of his idealistic theory, who kills him without hesitation and remorse and refuses to extend to him the same mercy he showed even to the bully leader earlier. In trying to distill human nature down to its best elements, he only, through his own cruelty, took a decent person and turned him into a monster.

So I do want to give the movie props for having small but much appreciated moments like that, although it’s spoiled by things like how Puppet-Robert looks…

You know, this movie might actually have a message about the futility of utopian schemes for improving human nature, especially when those schemes rely on violence and depriving individuals of their free will and…oh my God is that a rejected monster from 1960s’ Doctor Who?!?!

Next time, we get a prequel, which will at least spare me from bitching about the many, many, many continuity problems…or will it?!