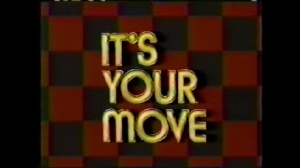 As hard as it is to deny that cultural gatekeepers from Hollywood to Doubleday screw up and pass on or outright kill a good project, there are few gems in the cultural landfill. This is even true in the notoriously cutthroat world of network TV. For every Profit or Firefly or Korgoth of Barbaria, there’s at least three Heil Honey I’m Home!s. And if a show is acclaimed but wound up in the slaughterhouse before its second season, it usually ends up a cult classic with more acclaim than even shows that had much longer runs. For an obvious example, it’s a safe bet that people won’t stop hailing Firefly and whining about its treatment by the network until the Earth is consumed by the expanding, dying sun.

So it’s always a rare and wonderful hipster-y thing when you know of a show that’s genuinely very good, never met cult hit status, and yet had its life cut short by executive decree. My own cherished diamond in the rough is It’s Your Move, the entire first, last, and only season of which can be viewed (as of this writing) on YouTube thanks to the Internet’s tireless pop culture preservationists. The show was the second brainchild of producer duo Michael G. Moye and Ron Leavitt, conceived between The Jeffersons and Married…With Children (I bet you – yes, you – didn’t know that, did you? Now that episode of Married… where Peg and Marcy try to drag Al and Jefferson (get it?) to a Jeffersons nostalgia stage show makes more sense!). 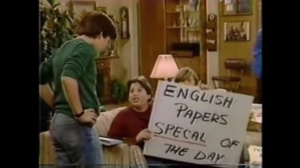 Oh, and the star of the show is a 15-year old Jason Bateman, of “Totally ducking the child star curse” fame.

But besides the element of hindsight what still makes this show stand out is its premise. Matthew Burton (Bateman) is a juvenile con-artist who sells term papers among other things, but covertly gives all the money he illicitly makes to his struggling single mother Eileen (Caren Kaye). Matthew hopes that his mother will marry Mort, a sleazy lumber magnate who will nonetheless keep his mother set for life, and has been driving away all of her less financially secure suitors. Unfortunately for Matthew, an unsuccessful writer named Norman Lamb (David Garrison, whom Leavitt and Moye would bring with them to Married… as Steve Rhodes) has just moved into their apartment building. What Norman lacks in published works he makes up for wits, and proves a match for Matthew’s schemes to drive him out of his mother’s life. 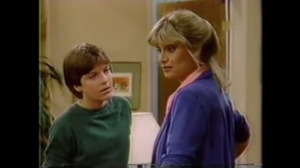 In a medium and a genre mocked for reheating old premises ad nauseam, it’s a really clever concept for a show, albeit one that might have been hard to sustain for more than a few seasons. The jokes might not seem all that noteworthy today, but in a time oversaturated with family-friendly sitcoms they had that edge that would later carve out a special place for Married…With Children. You can see the resemblance in dialogue like this:

Eli (a friend of Matthew’s): Gee, I wish I had a sister to torture.
Matthew: Ah, use your imagination.  You got a grandmother!

Matthew: Hey, guys today wouldn’t know class if it came up and bit them.
Eileen: I’ve tried.
Matthew: Huh?
Eileen: Nothing.  Nothing.

Matthew: How about calling Mort?  You got his number?
Eileen: Oh yeah.  He makes it very easy. You just dial ZOOLIFE and there he is.

That’s right, two sex jokes in a conversation between a woman and her teenage son! 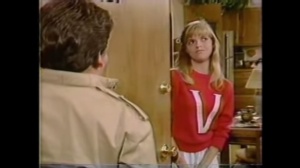 Besides the fact that I do think the show is genuinely funny, if perhaps not as distinctive now as it was in 1984 and 1985, it’s really well acted with fleshed-out characters who manage to leave an impression even in the span of 24 minutes. David Garrison is admittedly more or less playing Steve Rhodes here, but his rivalry with Matthew clicks, even if by necessity it and his interest in Eileen are rushed a bit. Matthew himself is a strong center, who gives the show more of a heart than you might expect, more so than Married… anyway with the exception of a few episodes. He goes from conning people to gently urging his mother not to be down herself, showing compassion without losing his core as a genius grifter-in-training.

Speaking of which, it’s the relationship between Matthew and his mother that’s really the most interesting part of the show, at least in the pilot. Without getting too unnatural or precocious, the two have a relationship of familial equals that promised to be a core of the show. The exception is Julie, who is a bit too much the “bossy older sister” archetype, although she too gets a moment where she shows she genuinely sympathizes with Matthew’s motives, just not his methods. 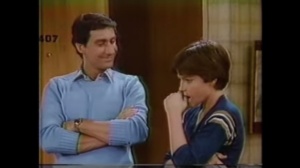 Fans of Married…With Children might catch glimpses of the show to come, aside from a proto-Steve Rhodes in the spotlight. Eileen’s life of financial and romantic desperation and even the clever Norman Lamb’s status as a failed writer-in-denial are all part of a “comedy of failures” that’s similar to the Bundys’ universe. Matthew and Julie’s interactions are Bud-and-Kelly-esque, but on a slightly more subtle level there’s the underlying idea of streetsmart teens heavily armed with a very adult cynicism.

So why didn’t It’s Your Move get a second season?  The Wikipedia oracle claims it was largely if not entirely because the show was put up against Dynasty. That may very well be, but I suspect its premise was too much to carry. Even the great sitcoms have premises you can spell out in a tiny blurb; not so much with It’s Your Move. It’s tempting to say that this show was before its time and might have thrived in our current “golden age” of television, but I can’t easily imagine it working as a sitcom on a network even today, unless it was put on as “prestige television” on HBO or Showtime, or got retooled as a comedrama.

But luckily, especially if you’re a Married…With Children or a Jason Bateman fan, you can and should dig out this gem for yourself.