So Barbara becomes Batgirl, and it’s as random in the book as it is in the movie. There’s no explanation about why Alfred’s AI clone would bother with recruiting Barbara, especially since she doesn’t really have that much training. I mean, it’s one thing to be good at gymnastics and racing motorcycles, it’s another thing to have the ability to defend oneself from gunfire. The thing that I can’t help but keep harping on is that Barbara just doesn’t fit into the story at all. 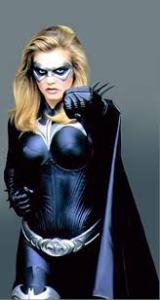 It doesn’t help that Batgirl doesn’t have much of a personality. Really, she comes out of the proud tradition of ’80s/’90s female characters who, forced into a narrative that’s a sausage fest, are just generically “strong.” To Friedman’s credit, he does flesh out Batgirl a little bit more by having her rail against Bruce and Dick’s apparent neglect of Alfred (of course, even with the reader having the privileged information that Bruce and Dick are vigilantes, she still looks kind of justified).

Really, the best way to make Batgirl fit at all would have required a total rebuilding of the script, having Batgirl as a bigger part of the narrative, an outsider POV who gets dragged into the world of Batman and Robin. Maybe she just starts out as an amateur vigilante inspired by Batman’s heroics, or she has a loved one who needs a cure to Poison Ivy’s poison, or she happens to have an item or information that Mr. Freeze wants. Let’s face it, most options would be better than “An AI clone of her dying uncle arbitrarily decides she should have her own Bat-costume.”

Meanwhile, Mr. Freeze and Bane take over Gotham Observatory, which does lead to one of my favorite moments in the book, even if it highlights all the just complaints fans have about Bane’s portrayal in the movie:

[Freeze] looked up at Bane.  “Big family?”
Bane just stared at him through the slits in his mask.
“Like pets?”
Still no answer. Just that stare.

Sure, it’s jokey, but who wouldn’t love a scene of supervillains making awkward small talk?

To distract the heroes away from Mr. Freeze’s preparations, Poison Ivy has unleashed a Robin signal leading to her hideout. We think Robin has taken the bait, but of course Batman was able to invoke the Power of Friendship to convince him of the painfully obvious fact that he’s been brainwashed by Poison Ivy. Another point in Friedman’s favor is that he manages to make it not just about Batman and Robin being equal partners like in the movie but about Batman’s own trust issues, but…well, it’s still Batman & Robin.

Robin sets up Poison Ivy with rubber lips, which, well, always struck me as an unnecessary risk that has no point except setting up a dumb cliffhanger. Did Robin really need the confirmation from Poison Ivy loudly bragging that she had just murdered him after their kiss? Well, actually, I can see this incarnation of Robin being that dumb, so point taken, Batman & Robin. Rubber lips or not, Poison Ivy is still able to pretty effectively slow down Batman and Robin with her mutant vines. She’s about to rejoin Mr. Freeze, when Batgirl pops in and delivers a pretty smug speech, even by the standards of superhero-contra-supervillain screeds.

“Using feminine wiles to get what you want,” the newcomer snapped. “Trading on your looks. Exploiting men’s weakness for sex. Read a book, sister. That passive-aggressive crap went out twenty years ago. Chicks like you give women a bad name.”

Harsh words from a character who totally benefits from the Smurfette Principle, Batgirl.

For some reason, in this version Batgirl dispatches Poison Ivy by pulling her hair and giving her a knee to the face, rather than just kicking her in the midsection like in the movie. Either way, Poison Ivy is pretty easily defeated, a fitting end to a completely declawed classic member of Batman’s rogues gallery.