If there’s one valid complaint about the current superhero boom, it’s the lack of superheroines. Given that Hollywood producers really are dumb enough to look back to the failure of Catwoman and even Supergirl as proof that audiences won’t take any superhero film with a female lead, it’s understandable this has been the dark underbelly of the current nerd utopia. Pop culture critics often lament the lack of good female superhero movies from not just the present-day crop, but from the ’90s, but while their complaints are legit, they usually overlook one gem: 1995’s Black Scorpion.

Okay, okay, honestly in a couple of ways it’s more of a ’90s, Cinemax-style b-movie (complete with token laughing and vaguely ethnic Death Wish 3-esque thugs!) than a superhero movie. And I don’t think you have to be a tumblr regular or Twitter crusader to perhaps be taken a little aback by a superheroine movie where you can easily make a drinking game out of the gratuitous topless women and where the star’s superhero costume was so tight she had to literally be sewn into it. Last but far from least, it should be mentioned this was a production of Roger Corman’s New Horizons company, with all that entails.

And yet, it would be wrong to just write this off as Roger Corman’s attempt to cash in on the Burton Batman movies, true as it may be. In fact, I have to admit this is one of my favorite b-movies and superhero movies…unironically, even.

If you judge it as a superhero film, it’s honestly pretty good if you can look past its straight-to-video ’90s b-movie DNA. Despite its kink leather exterior, it hits that sweet spot between the cynical faux-mature darkness of a Zack Snyder joint and the hyper-self-conscious and studio-ordained camp of a Joel Schumacher Batman film. What else can you say about a movie where the titular superheroine manages to jury-rig a taser to give her the power to not only shoot electrical bolts through a ring, but somehow jump twenty feet in the air?

After all, poor Black Scorpion (Joan Severance) has to make do since she doesn’t have the wealth or resources of a Batman. Her alter-ego Darcy Walker is a cop in Los Ange-sorry, ”Angel City” whose undercover investigation as a prostitute to bust a murderous pimp goes awry thanks to a small foul-up by her partner and crush Michael (Bruce Abbott). Things go from bad to worse when the pimp beats up a prostitute Darcy had befriended and vowed to protect, Tender Lovin’ (Terri J. Vaughn), and Darcy’s father, Stan (Rick Russovich), a disgraced ex-cop, is murdered at apparent random by a district attorney. Feeling powerless, Darcy, inspired by an old moral fable about a scorpion and a frog her father told her when she was a little girl, becomes a vigilante, the Black Scorpion, who on her first night out kills the pimp. With the aid of a chop shop operator, Argyle (Garrett Morris) who just so happened to steal some high-tech military equipment, Black Scorpion extends her war to all violent criminals. Just when things are starting to go well for her new career, with her even getting a shape-shifting car and uniform thanks to Argyle, the Black Scorpion gets wrapped up in the schemes of her first supervillain, a bizarre armored figure calling himself the Breathtaker (Ed Gilbert), whose own origin story is linked to a tragic mistake made by Darcy’s father years ago. 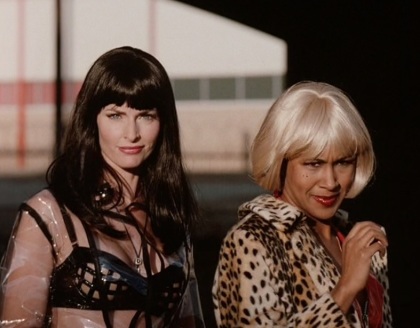 It’s worth pointing out the movie was scripted by Roger Corman go-to screenwriter, Craig J. Nevius, who also did the script for Roger Corman’s more well-known foray into superheroics, 1994’s Fantastic Four, which the Cinema Snob persuasively defended as not as bad as its underground reputation, especially in light of more recent and much, much more bigger-budgeted adaptations of Marvel’s First Family. Like that Fantastic Four, Black Scorpion does at least have the signs of being crafted by someone who actually understands and, well, likes superhero comics.

Yes, the movie does have something of a bleak tinge to it, but it never insists on its own edginess. While Black Scorpion does kill people and uses a gun (although in the last act she does show compassion to her father’s killer), her opponents include a female pro-wrestling duo who Joan Severance battles (doing her own stunts, no less!) in a genuinely memorable fight scene. Plus it’s just delightful to have a movie like this with dialogue like, “This might be a good opportunity to use some of those experimental devices on these trauma patients.” Or foreshadowing so unapologetically blatant it includes Michael telling Darcy in the beginning that her horoscope (for a Scorpio, natch) promised a change and new additions to her wardrobe, with Tender Lovin’ soon advising, ”Maybe there’s another you that you don’t know about!”

Just don’t ask why Darcy’s police precinct includes two men in completely civilian garb who carry guns and appear at active crime scenes who everyone calls “the rookies.” Or if it’s a deliberate joke when Argyle says his super-tech empowered car “reorganizes atoms at a molecular level.” Dear Neil deGrasse Tyson, I hope it’s a joke.

Really, it’s all the little touches that still sells me on Black Scorpion. Like Black Scorpion, thanks to Argyle’s influence, having to address her fancy car computer with “Yo, computer!” Or that in one scene you can hear one news report on Black Scorpion beginning with “In other news, W.A.M. – Women’s Assertive Movement – has named that masked vigilante the Black Scorpion their woman of the year. But while the feminist group supports her independent spirit, they admit to being less enthusiastic about her costume or lack thereof” and continuing as Darcy and Michael talk with talking heads debating whether or not Black Scorpion’s crime-fighting is undermined by her choice of costume.

My own favorite bit, though, is the Breathtaker’s response to the inevitable “You’re insane!” remark. He just muses, “Am I? It’s quite possible. Being dead for 13 minutes can do that to you. Not enough oxygen to the brain.” 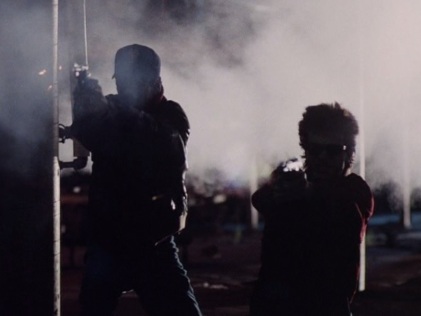 It helps that the movie is helmed by Joan Severance—who is really quite good at handling the lead role even if the movie is a bit too free for its own credibility with exploiting her, um, other assets—and it works to the movie’s benefit that she’s teamed up with the delightful Garrett Morris, who gets plenty of moments thrown his way like his reaction to finding out that Black Scorpion is not, in fact, black. The rest of the cast isn’t quite as memorable, although at least “the rookies” aren’t given quite enough screen time to reach critical Odious Comic Relief mass and Stephen Lee gets in a couple of good scenes as a send-up of the stereotypical action movie police chief—only without the temper, but twice the stress and a chain-smoking habit.

Even Darcy’s relationship with Michael has a ring of authenticity, in spite of occasionally forced and tone-deaf dialogue, including Michael flat-out admitting he has the hots for Black Scorpion to Darcy’s face! (I’m no expert in love, but that seems like a no-no, mysterious vigilante for a crush or no). Avid watchers of superhero films and readers of comics might also be delighted—or slightly offended—at how the Black Scorpion resolves the classic “my love interest has fallen in love with my alter-ego” dilemma, by breaking into his apartment and having sex with him in costume and then branding him. Somehow I don’t think that would have worked between Batman and Vicki Vale. 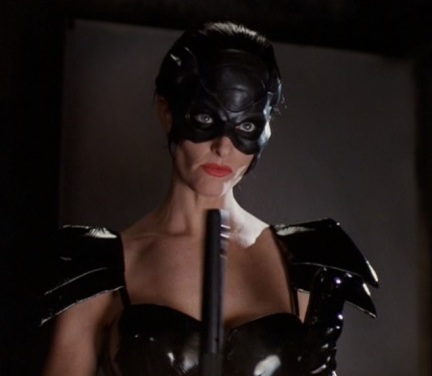 So in the more sensitive climate of the mid-2010s, I can see why enlightened fans of the superhero genre might not want to declare Black Scorpion with its ’90s late-night cable sensibilities as a lost female superhero gem. Still, I think that’s a mistake. Not unlike Corman’s Fantastic Four, it actually conjures up the spirit of the genre better than certain big-budget adaptations I could name (…especially one that’s been recently released as of this writing to many groans). Even though Corman’s attempts to turn it into a franchise—including a sequel, a comic book series that only lasted four issues, and a Sci-Fi Channel series from 2001 that survived just one universally panned season—flopped, at the least the first Black Scorpion film simply deserves to be remembered.

And maybe we can give another Black Scorpion comic series, this time by someone like Gail Simone, a go? The comics industry is a poorer place without a female, working-class Batman!