As my first real post I defended daytime soap operas and bemoaned their slow decline into extinction in the United States. Perhaps neatly but unintentionally proving my own point about the entire genre being culturally blacklisted, I haven’t talked much about them since, even though I genuinely, honestly do still watch General Hospital.

How’s that for an out-of-the-closet moment?

Although I haven’t really seen an episode since college, I am still fond of Days of Our Lives, even after the show became a barely coherent parody of itself in the ’90s thanks to notorious head writer James E. Reilly, who is probably known even outside the soap fanbase, if not by name, for doing the Exorcist rip-off storyline on Days and then starting the so-surreal-it-should-have-been-performance-art soap Passions. Since his regime, the show has sort of snapped back to offering that brew of romance and domestic and medical drama and gloriously but somewhat reasonably implausible adventures all surviving American soaps more or less offer. As of this writing, and in spite of my own grim predictions, the show is still puttering along, even though as I understand it the budget has still been sliced so thin Days’ fictional city of Salem is down to maybe five sets.

Anyway, it came to my attention that this year the show’s greatest—and for many years since his first appearance in 1982 core—villain Stefano DiMera was killed off for good, after many resurrections and fake-outs. I know what you’re thinking, but sadly this one will stick. The actor who has played Stefano from the start (except for one very brief and inconsequential appearance where he was played by another actor), Joe Mascolo, suffered a stroke that left him wheelchair bound. So the show made the decision to give the character an epic send-off, where he basically commits suicide through the “goading a grieving, vengeful archenemy” method, mocking his archenemy Hope Brady over the death of her husband.

Why was said archenemy vengeful? Ironically it was for the one crime Stefano didn’t commit, the abduction and torture of her husband Bo who died from an untreated brain tumor. 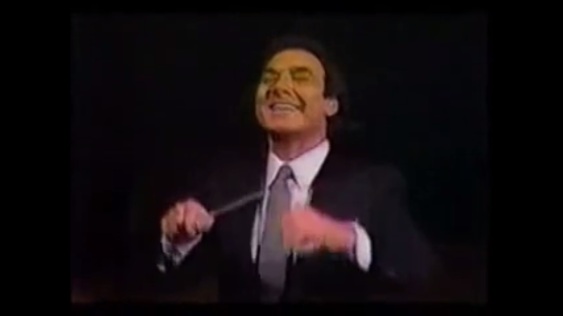 As you could probably guess from the name, Stefano DiMera started out as a crimelord, one thinly disguised as a suave, cultured international businessman and who loved opera (before you cry stereotype, though, keep in mind that it’s probably not a coincidence that in real life Joe Mascolo is an opera buff). He first arrived in the sleepy Midwest city of Salem at the behest of his son Tony (who in soap opera fashion turned out to really be the son of Stefano’s gardener who had an affair with Stefano’s wife Daphne, which let Tony pursue a relationship with Stefano’s biological daughter Renee without worrying about the “i” word, since Renee was the daughter of one of Stefano’s mistresses, but that’s another story). From there, he made Salem the new base of his quasi-illegal operations, until he was shut down by local cop Roman Brady. Supposedly Stefano then died of a heart attack, but of course that didn’t happen, and instead it set up one of those feuds between a working-class family and a billionaire dynasty that can only happen in soap operas.

Well, okay, later in the ’00s it was “revealed” that Stefano knew about Roman and the Brady family all the time. The vendetta started way back in interwar Ireland when a nun from the Brady family had a torrid affair with Stefano’s father, a traveling salesman. The family shame drove her to fake her death (because soap opera, of course) and his grief turned Stefano’s dad from a loving into an abusive father, which drove Stefano into a lifelong crusade to become rich and powerful enough to screw with a working/lower-middle class Irish-American family for revenge. And you thought DC’s and Marvel’s retcons were shameless.

Call me a purist, but honestly I prefer the old origin, where Stefano just became fixated on Roman Brady and by extension his family because he (and his wife, Days uber-diva Marlena) were two of the few people who ever bested him. There’s a beautiful simplicity in that.

Oh, and also, the son of that nun and Stefano’s father became John Black, another of Stefano’s victims and archenemies. Except that got retconned. Maybe. Except we never find out who that kid was. John Black has had, like, eight different origin stories. I want to keep this obituary less lengthy than War & Peace so let’s move on.

As convoluted as his history and motivations became, there was actually something simplistic yet operatic behind Stefano, thanks in no small part to Joe Mascolo’s performance which combined Old World bombast with low-key menace. As a character, Stefano had the dedication to the famiglia you would expect from an old-school Italian villain. Maybe too much dedication, given that he had three wives and at least seven mistresses, along with nine children (two of whom were adopted from the family of one of his own murder victims, natch). Sadly all his children had a habit of ending up evil and/or insane and/or dead, despite and often because of Stefano being the original helicopter parent (sure, your dad might pay to have your car fixed even in your 30s, but would he arrange to have a pregnant lookalike pretend to be you because in your paranoia you think your husband will leave you for his believed-dead but suddenly returned love-of-his-life the minute he finds out you miscarried and thus discovering he has no parental obligations to you and your baby? No? Didn’t think so).

Of course, the various teams of writers who worked on the show didn’t plan over the course of decades for the DiMera brood to all have tragic fates. But it did get remarked upon within the show’s universe, and ended up being one of those happy accidental themes you get when you have a fictional universe with many architects. A loving, generous father whose own idea of love is so twisted that it ends up destroying everyone around him despite the sincerity and depth of his feelings? That kind of thing, if you can forgive me for being so obvious, puts the opera in “soap opera.”

But really what made Stefano so much fun was that, like modern soap operas themselves, a messy but glorious hodgepodge of genres. He started out as a mob boss with a crooked corporate magnate shell, but then became an international terrorist, a political powerbroker, and a gothic supervillain whose habit of returning from the dead (Wikipedia even has a list of all the times he beat the Reaper!) had a supernatural edge. After all, he liked to call himself the Phoenix and claimed that he was immortal because, by being the seventh son of a seventh son, he fulfilled some old family legend. If you think I’m exaggerating with “supervillain”, consider that he had an island populated with pink-uniformed Amazonian henchwomen.

Keep in mind this was long before James E. Reilly made Days of our Lives “weird.”

But, despite traditionally color-coding his minions, Stefano was actually quite progressive. After all, in one of his plots to get close to Marlena to abduct her two children to “replace” his dead daughters Renee and Megan, he had no qualms with disguising himself as an old woman, “Mrs. Lafferty.” In other words, he was an evil Mrs. Doubtfire long before the movie!

But what obituary of a crimelord/terrorist/mastermind/tycoon/supervillain would be complete without a list of his greatest hits?

°   Arranged to have his sociopathic nephew Andre receive plastic surgery that made him the lookalike of his estranged thought-to-have-been son Tony, then kidnapped and imprisoned Tony so that Andre, pretending to be Tony, could start a serial killing spree that Roman would be framed for (to save himself from being discovered, Andre did also kill Stefano’s own daughter, Renee, for which Stefano left Andre for dead. Of course, this didn’t stop them from working together again years down the line. See, Stefano does have a forgiving soul!)
°   Planted a bomb at Salem’s opera house set to go off during a performance, killing the city’s top citizens in one swoop, all for revenge against an entire city.
°   Faked the death of cop Hope Brady and brainwashed her into taking on the identity of a dead associate/lover of his, a member of a European royal family who moonlighted as an art thief.
°   Was involved in not one, but two men becoming brainwashed and shopped around as assassins for hire.
°   Filled a hospital with poison gas to hold all the staff and patients hostage and forced the hospital’s chief of staff to give him a kidney transplant from an unwilling patient, the aforementioned John Black.

And he did all of this with flair, a smile, and a hearty laugh. I’ve written before about how I tend to sympathize more with villains and outcasts than with heroes, but, damn, if Stefano didn’t make evil look like a lot of fun, even if it rarely worked out for him.

And Joe, the odds are extremely good that you’ll never read this, but I sincerely hope you have a long and comfortable retirement.