In this very special episode, we learn friends aren’t always forever, not to judge a book by its reputation, not to trust strangers and ancient Babylonian storm-demons, and not to drink strange herbal medicines being sold in a burnt-out slum.

The point of Yes, This Really Happened is to highlight quirky, off-kilter episodes and installments of series that are likely to be obscure. That said, this is probably the most well-known, at least among people who (like me) grew up with the X-Men franchise in its glory days. Still, what better way to celebrate the 50th anniversary of Star Trek than to explore the Star Trek crossover that was totally inspired by storytelling, and not at all by cynical, opportunistic marketing?

(That was sarcasm, of course).

Okay, okay, to be fair, every single franchise crossover is a marketing gimmick and none are easy to justify as honest explorations of fictional worlds. But even then there’s usually some kind of thematic connection or at least they share not only a genre but a nice little neighborhood in it (Aliens vs. Predator, Batman/Judge Dredd, Vampirella vs. Lady Death) or the jarring juxtaposition makes a great starting point for the whole affair (Archie Meets The Punisher, Archie Vs. The Predator, Archie…well, you get the idea). 1996’s Star Trek/X-Men, though? It’s neither natural enough to really scratch any kind of itch for fans, nor is it quite bizarre enough to even work as a novelty. It’s just…well, let me get the obvious joke out of my system; it’s just highly illogical. 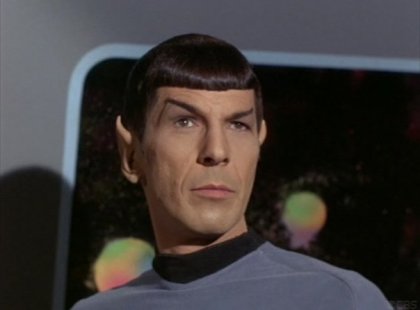 I suppose you could say that there is a connection in that the X-Men had a lot of space adventures in the late ’70s and early ’80s, and that the X-Men’s dream of harmony between humans and mutants is like the Federation promoting peace and inclusion…no, still illogical.

Illogical from a storytelling perspective, that is. From the marketing POV, it all makes perfect sense. See, in 1996 X-Men was still Marvel’s #1 cash cow. Plus the company was still recklessly riding its speculator boom highs and was spending money like Scrooge McDuck. In the course of throwing its cash around, it had acquired the license to the entire Star Trek property (rather accidentally, since the rights to Deep Space Nine and Voyager were held by Malibu Comics, a company that Marvel bought just for their new technology in digital coloring). Once they had worked out with Paramount a deal to handle comics for all Star Trek series (again, this being a time when Deep Space Nine and Voyager were still on television, and the second Next Generation movie, First Contact, had just hit the theaters to critical and popular acclaim), Marvel decided to base an entire line around the various incarnations of Star Trek. What better way to kick things off by using the old cash cow to introduce the new one? (After all, it’s not like there’s any kind of overlap between superhero comic fans and Trekkies).

Well, at least with in-universe logic it’s easier to get the denizens of a superhero universe to meet Captain Kirk and his crew than, say, Frasier Crane and his family. The Enterprise is investigating an anomaly above the uninhabited planet Delta Vega, the very same planet where Kirk was forced to kill his crew member and personal friend Gary Mitchell after an encounter with an energy field increased Mitchell’s innate and weak psychic powers to a godlike level (in the original series’ very first aired episode, “Where No Man Has Gone Before”). Suddenly an unidentifiable ship appears through the anomaly and the crew of the Enterprise is only able to detect seven beings that are human but not quite before the ship is suddenly destroyed.

Unknown to Kirk and his crew, the seven humanoids on the ship, the X-Men (here Beast, Storm, Wolverine, Bishop, Jean Grey, Cyclops, and Gambit) managed to teleport off the ship and onto the Enterprise just in time. Of course, like most superheroes who aren’t Batman or trained by him, the X-Men just aren’t that good at subterfuge. Gambit’s need for medical attention as a result of being wounded in the ship explosion leads them to soliciting help from the Enterprise’s Dr. Leonard McCoy while Spock senses Jean using her telepathy and, looking for the source, has a violent run-in with Wolverine (Vulcan nerve pinch, meet healing factor!). Hostilities do not last long, and the X-Men explain that they come from an alternate reality, sent into the anomaly by Empress Lilandra of the interplanetary Shi’ar Empire. Ostensibly it was a routine mission to track Lilandra’s sister and one-time rival for the throne turned lackey, Deathbird, who defied orders to go into the anomaly with the superpowered Shi’ar Imperial Guard to hunt down a mysterious energy source. However, Captain Kirk and  X-Men discover the whole reason Lilandra involved the X-Men in the first place; an old enemy of the X-Men’s, Proteus, a body-jumping, reality-warping mutant, created the anomaly while searching the multiverse for an equal, and he found such an equal in the remains of Gary Mitchell…

The one good thing I can say about this story is that the script by Scott Lobdell (who was the main X-Men scribe through much of the early and mid-’90s) does make reasonably good use of both franchise’s histories. There’s a few kinks here and there (even if Deathbird is supposed to be working for the Shi’ar Empire as she was after the events of the Avengers saga Operation: Galactic Storm [in case you’re wondering, nope, I didn’t have to look that up!], why is the Imperial Guard working for her, even when it’s clear that she’s not following Lilandra’s orders?). Still, the idea of Kirk having to face one of his biggest regrets when Proteus resurrects and merges with Gary Mitchell is a strong connection to the original series of Star Trek and gives the conclusion where Kirk and Jean telepathically face what’s left of Gary Mitchell inside Mitchell/Proteus’ mind a punch. The ties to X-Men are actually less strong—despite what you might expect, this is honestly much more of a Star Trek tale than an X-Men adventure—but Jean Grey’s comparison between Gary Mitchell and Dark Phoenix, another case of “going mad just from having the powers of a god”-itis, doesn’t at all feel forced or fall flat.

Also it helps that the series doesn’t indulge in blatant fanservice as much as you might expect, beyond the Spock-Wolverine brawl which reads like a scene ripped from fan fiction or a really forced moment where Dr. McCoy says, “He’s dead, Jim.” Instead the character beats ring true if a little hollow for the most part, even concluding with the Enterprise crew cooking up their standard elaborate techno-babble-fueled engineering ploy with the help of the X-Men’s powers to close the anomaly. There’s not too much slouching in characterization either. The conventional wisdom on Scott Lobdell’s X-Men stories is that his strong point was in writing little character moments, and that somewhat holds true here, if for not much more than a delightful scene where Kirk hits on Jean Grey in a perfectly Kirkean way only to get politely shot down.

Even so, this is still a story with fourteen characters (not counting the villains!) in only a 38-page saga (technically the issue is 67 pages, but the rest of it is taken up with pin-ups and promotions for Marvel’s new Star Trek series). Even a major franchise villain like Deathbird is introduced only to barely even serve as a plot device and yet another fountain of exposition. So there’s a lot of potential character material that’s left in the cargo bay. It’s probably understandable that Uhara, Chekov, and Sulu lose panel space to the Big Trio of Spock, Kirk, and McCoy, but there just isn’t enough time for both franchise’s stars to mesh together organically. Earlier I joked about one scene looking like something out of fan fiction, but honestly this is why crossover fan fiction can and, depending on the writer, does sometimes work better than the official thing. There’s infinite room for all those little character interaction gems that make such stories worthwhile for fans. What you instead get more of with X-Men/Star Trek is the most clunky exposition you can find anywhere in the Alpha Quadrant. 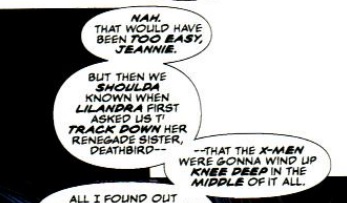 Oh, and nerdy overthinking time, but…even if this is just an alternate universe to them, shouldn’t the X-Men be more curious about the fate of mutants, homo sapiens superior? Clearly mutants existed in this version of the Star Trek universe since Spock instantly recognizes both terms—and, to be fair, the episode “Where No Man Has Gone Before” does make it canon that a few humans are born with and can inherit low-level psychic abilities, although nothing nearly as awesome as being able to turn your skin to steel or grow deadly razor-sharp bones from your body. But at the same time the Enterprise’s scans don’t recognize mutants…so maybe Jean Grey’s initial concern that Gary Mitchell was killed just for being a mutant was valid in a way. Maybe, just maybe, because the Eugenics Wars in Star Trek Earth’s history showed the dangers of letting superpowered beings run loose, mutants were culled during or just after the wars except for harmless psychics…okay, sorry, we’re officially at the “Overthinking something Scott Lobdell probably threw together in a few hours” point. (Still, if you read the story my way, it does make Cyclops’ comments to Kirk about how the Federation’s future is like the one X-Men aspire toward cruelly—or beautifully—ironic!).

Speaking of mutants being shoehorned into the Star Trek universe, it’s tough not to notice how out of place the X-Men look with their Olympian bodies next to the very average physiques of the Enterprise crew. Despite that, the art is decent, encompassing both the X-Men and Star Trek reasonably well. And at least it didn’t go the more awkward route of trying to have the Enterprise crew keep up with the X-Men by giving Scotty and Uhara the bodies of professional bodybuilders.

To sum it all up, X-Men/Star Trek doesn’t at all transcend the usual issues with such official crossovers. Aside from the bits that look like they were chiseled out of a genuinely good follow-up to “Where No Man Has Gone Before,” X-Men/Star Trek is the comic book equivalent to fast food. You might find it tasty, but you probably won’t get any lasting impression. Unless seeing Spock give Wolverine the Vulcan nerve pinch in an official comic really is something you’ve been waiting your whole life for. In that case, have at it!

Edit: And yes, I know there were two sequels, a comic Second Contact (the X-Men with the Next Generation crew) and a novel Planet X. Honestly a lot of what I said here could apply to Second Contact. As for Planet X, maybe I’ll cover it one of these days!

It’s time to go deeper into the ruins of Tokyo, where we’ll find a hotel that manages to be ugly even by post-nuclear holocaust standards and meet a friendly hellhound.