The Internet is all excited about the trailer for a new Star Wars movie, so of course we have to talk about…Star Trek! 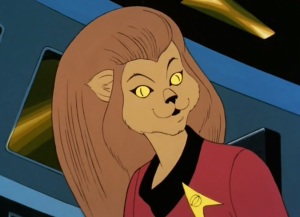 First, some words about Star Trek: The Animated Series.  The animation does have that cheap look you’d expect from, well, pretty much anything by Filmation—expect to see that stock image of communications officer M’Ress over and over and over again—but the series is actually considered by even many diehard Trekkies to be a worthy successor to the original series. It’s even gotten the honor of being deemed canon by no one less than the god of the Trekkies, Gene Roddenberry. [Note: Friend of the blog Zaki Hasan has pointed out that Roddenberry revoked its canon status, and according to Wikipedia Roddenberry made the issue of canon…complicated.  But apparently Paramount officially considers the animated series canon, so there you go!]  But it’s not surprising considering that Roddenberry managed the neat trick of getting the entire original cast on board with it. Although perhaps that’s not too surprising, since they never did their lines together in a studio, but on tapes that they’d mail in. Anyway, the animated series certainly did have its goofy moments that wouldn’t be out of place for a cartoon of the ’70s, although really nothing egregious compared to live-action episode “Spock’s Brain.” 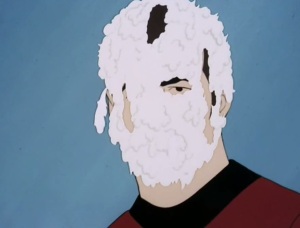 The Enterprise is flying near the Neutral Zone and, as you might expect, they get attacked by Romulans. (A big nit to pick is that apparently it ain’t no thing for the Romulans to just up and blatantly pursue and try to destroy a Federation starship with more or less no provocation. Were the Romulans that aggressive in the original series despite the whole Neutral Zone thing? Wait, please don’t answer that). Kirk has the Enterprise steered into an unidentifiable energy field—come on, Kirk, have you actually ever seen an episode of Star Trek?

Of absolutely course, the energy field screws up the Enterprise, but the symptoms don’t manifest until later as the entire crew are subjected to an escalating series of petty pranks; replicators shoot out piles of food and pies to the face; in a forest generated by the holodeck…sorry, it isn’t called that yet (and, yes, this episode is technically the first canonical appearance of a holodeck!)…Sulu, Bones, and Uhara get trapped in a forest pit trap; and, best of all, Kirk’s uniform comes out of the space-laundry like this. 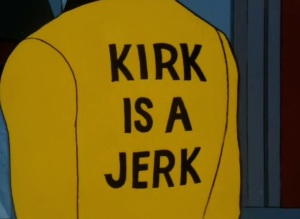 The best part of that? Spock responds with a cocked eyebrow and protests, “Vulcans do not laugh.”

Spock eventually deduces that the problem isn’t a crewmember with space madness, but that the energy cloud gave the Enterprise sentience, just somehow a sentience that’s only interested in playing practical jokes. Sadly the newly sentient Enterprise doesn’t really get to have much of a personality. The most dialogue it speaks (with the voice of Majel Barrett, natch) is when Kirk tries to give the computer a command and it exhorts him to say “please with sugar on.” Nor does the computer really go all HAL. It really just seems like the Enterprise is kind of a jerk with a sense of humor more juvenile than Adam Sandler’s most devout fan.

Luckily, its quirks come in handy when the Enterprise is attacked by the same Romulan ships again and it sends out a decoy Enterprise in the form of a…giant balloon replica that’s even bigger than the Enterprise itself. (Yes, I still stand by my statement that this is really no goofier than “Spock’s Brain”.)  This just pisses off the Romulans even more, but it gives Kirk enough time to trick the Enterprise into flying back into the same energy cloud, which…somehow returns the Enterprise to normal? (The Enterprise actually gives a rather poignant protest of “…not…fair”, which, like HAL’s rendition of “Bicycle Built For Two”, does call perhaps unintended attention to the brute fact that Kirk just lobotomized a newly emergent form of consciousness.) And the Romulan ships, which follow the Enterprise, get the exact same effect? Wait, how did the ship’s computer do stuff like put soot around Spock’s eye visor-dashboard…thing? And what the hell was up with that gigantic Enterprise balloon anyway?

It’s so obvious, but I have to say it.  Most illogical. 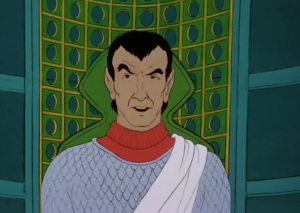 At least I do wish this was a “Next Generation” episode where Picard would have dramatically philosophized and anguished over having to lobotomize the Enterprise. And Riker would have had heavily implied sex with M’Ress.

Well, be that as it may, this was fun, and like all animated series episodes it does feel pretty authentic, which was all the more impressive given that the cast did their voice work between gigs. As dated as the animation looks, it’s still proof that the caretakers of the Star Trek franchise really should look into doing an animated series again, if only so they can depict aliens without too many budget constraints. Okay, this one episode may not be the best that the two-year run of the animated series has to offer, but it did give us “KIRK IS A JERK.”

And, don’t forget, it’s all canon!