So I suppose it’s inevitable I’ll just dwell on the same topics.  There’s only so much to be said about Batman & Robin the film, and like how Michael Jan Friedman must have struggled with stretching the movie’s sparse plot out into a book, it’s tricky to not return to some of the same ground in writing this book up.

That said, yeah, even though Michael Jan Friedman is a good writer, this book does more to show why Batman & Robin is an even worse interpretation of the Batman mythos than Batdude and Throbin. 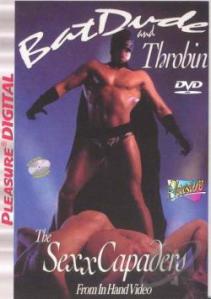 Fries and his wife were playing with a puppy in a field somewhere.  Upstate New York, he thought – or was it New Hampshire?  It was the height of summer, judging by the brightness of the light and the cut of their clothes.  What was the dog’s name again?  He thought for a moment.  Sunshine?  Sunspot?  Something like that.  It was getting harder and harder for Freeze to remember such things.

Notice the subtle differentiation between “Fries” and “Freeze”?  As if Mr. Freeze no longer even sees himself as the normal human being he used to be?  That’s a legitimately good character moment, but it’s all followed by…

“I didn’t mean to interrupt,” said Frosty, “but I got something here you might want to see.”  He held out a newspaper clipping.  Without a word, Freeze lifted his gun and fired.  In a flash, Frosty had frozen solid, still grasping the clipping.  “I hate it when people talk during the movie,” he muttered.

I’m not saying you can’t have actual characterization, much less the occasional poignant moment, alongside old-school camp.  Look at “Batman: The Brave and The Bold” series, which embraced Batman’s goofy Silver Age post but still had effective, genuinely moving moments like the members of the Doom Patrol, who had become cynical and washed-up superheroes, choosing to sacrifice their own lives to save a group of strangers.  Like a lot of good writing, it’s a delicate balancing act, one that’s completely overturned with a barrage of crappy puns coming from an interpretation of a villain the audience is supposed to feel sorry for.  Imagine if Magneto in X-Men: Days of Future Past went around telling Xavier, “Well, that’s why we’re…polar opposites.”

But lets move on before I churn out a whole treatise about this.  Mr. Freeze is planning to steal a diamond being exhibited at some charity gala that will be hosted by Bruce Wayne, but of course the whole thing is a trap.  By a cosmic coincidence, the gala has a botanical theme, and it’s where Poison Ivy chooses to make her true debut, appearing on stage like in the movie à la Marlene Dietrich coming out of the gorilla costume in Blonde Venus.

Naturally right away her pheromone magic works on Bruce Wayne and every other dude in attendance.

“Hi there,” said the woman, lifting the man’s chin with a slender forefinger. She winked at him. “And, er, you are…?” he sputtered. “Poison,” she said, smiling. “Poison Ivy.” Poison Ivy, Batman thought, trying to focus on her features. But it wasn’t easy. He left like a man who had drunk a quart of love passion.

Poison Ivy appears as one of the flower-themed girls up for auction. This might be a chance to make some commentary about objectification and Poison Ivy’s rage against men like Prof. Woodrue, but…no, it’s all about Batman and Robin already starting to fight over Ivy by trying to outbid each other, even though it basically means that Bruce Wayne is trying to outbid Bruce Wayne. We don’t really know why Ivy is bothering with all this, aside from the fact that the script wanted her to be there to meet Mr. Freeze. Again, I have to wonder how strictly Michael Jan Friedman was required to stick to the script.

Oh, and I neglected so far to mention one of the most important characters in Batman & Robin.

Then, out of nowhere, Gossip Gerty made a face and asked, “Is it getting nippy in here?”

Does Gossip Gerty get more screentime than Commissioner Gordon in the movie?  Let’s just assume, yes, yes she does.

Anyway, Mr. Freeze crashes the gala and confiscates the diamond from Poison Ivy, who falls in love at first sight.  The feeling is not mutual for Mr. Freeze, who turns out to be completely immune to her pheromones.

I have to admit again, I actually liked that bit…although like with Bane getting drafted as Poison Ivy’s muscle it does hint toward the script’s odd refusal to let Poison Ivy be much of a real villain in her own right, as opposed to the super-serious menace of this movie’s Mr. Freeze.

Mr. Freeze also leaves Poison Ivy with a snowglobe.  Inside is a miniature Gotham with the words “Welcome to Gotham City.”   No, I can’t imagine a more fitting way to welcome a newcomer to Gotham City than by having their super-criminals leave souvenirs to their victims.

Regardless of what I think about the tendency of most of the Burton and the Nolan movies to have at least pairs of supervilllains, teaming up Mr. Freeze and Poison Ivy does make more sense than putting together Man-Bat and the Mad Hatter, or Harley Quinn and the Scarecrow (which actually was the plan for the unmade Batman Triumphant). They’re both from the minority of genuinely superpowered members of Batman’s rogues gallery, and as the book itself points out they’re both “elemental.” Plus thematically putting the villain who symbolizes lust and passion with a villain who is a mournful, tragic figure yet believes himself to be dead to emotion does generate some creative currency. I’m iffier on the idea of making Poison Ivy an obsessed fan of a supervillain; shoving her into a spot that better fits Harley Quinn, in other words. i mean, from the very beginning, even though Poison Ivy’s origin has seen a lot of changes, she’s generally been about being a woman who has been hurt by men or a male-dominated society and using sex appeal to force her own way. But I can still see a romantic obsession based on admiration of another’s ruthlessness and inhumanity working, you know, or at least working if this wasn’t Batman & Robin. 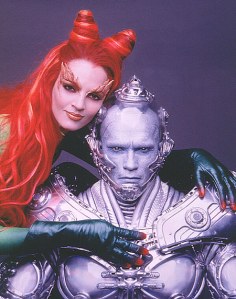 Enough of that, though, as Batman and Robin pursue Mr. Freeze we get the real relationship that drives the story:  the partnership of Batman and Robin, or rather Batman having to put up with Robin’s perpetual motion machine of whining:

I may have taken some liberties with the text there, but you get the gist.

At least we are left with this,

Bruce smiled tautly. “Be reasonable. You couldn’t even keep your mind on the job at hand. All you could think about was Poison Ivy.” Dick exploded – at least partly…

Well, we can’t possibly follow that up, so let’s breeze…or should I say, freeze through the rest: Mr. Freeze gets captured and sent to Arkham Asylum, while Barbara shows us that she’s even more of a Strong Independent Woman (TM).  We learn she knows judo and can handle a motorcycle, so it’s totally not out of the blue that she can be an effective vigilante fighting against superpowered lunatics!

Oh well, at least Michael Jan Friedman got away with not having to mention the Bat Credit Card.