So you’re writing a novel or a movie and you’re trying to decide on some quality that will make your villain more distinctive, more unusual. There’s one easy way: have them defy gender conventions! Thus we end up with villains like Ursula from The Little Mermaid, who was modeled after the Ur-drag queen Divine (yes, really) and Jafar from Aladdin, who wasn’t modeled after anyone in particular except a bunch of really dusty Arabic stereotypes. Okay, okay, I love Final Fantasy and I love Disney’s animated movies (well, most of them), so I don’t want to imply that the makers of these franchises are being reactionary or homophobic or heterocentric or whathaveyou, and I’ll just leave it to Gender Studies majors to parse out the implications. I’ll just say I think it all comes down to the cultural language we’re all programmed with, and not any attempt to respond to contemporary political or social issues – unlike, for example, the insanely homophobic portrayal of King Edward II in Braveheart (because it cannot be said enough times: screw you, Mel Gibson, even if you did an elaborate cameo in one of the greatest Simpsons episodes ever).

I just find it amusing that two franchises I like both went through the same trend in the early-mid ’90s: really effeminate bad guys. And I by “effeminate” I mean “almost in the drag-queen realm.”

Well, okay, maybe Jafar isn’t halfway toward auditioning for Edna Turnbladt in Hairspray, but he does come across as a homicidal Paul Lynde. Although unlike Uncle Arthur and the real life Paul Lynde, he does enjoy kissing a princess. 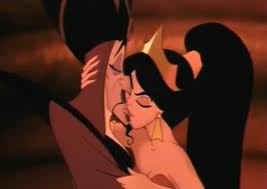 But, of course, sexual orientation doesn’t mean a guy can’t sashay with the best of them.

Emperor Palamecia is trickier to pin down, because what little personality he has only comes across in Dissidia and even then it doesn’t go beyond a few lines of dialogue. Nonetheless, we just have to look at him to see he’s like the offspring of Uncle Arthur and Hedonism Bot, which can only make him the winner of this round. 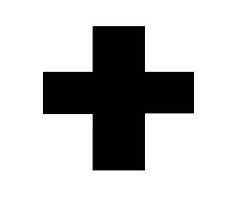 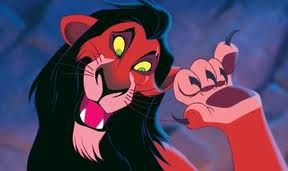 Scar does embody a pretty old literary stereotype – the mincing, cowardly, luxury-loving, treacherous male villain in comparison to the earthy, honest, and butch male hero. But it’s hard not to like him anyway, from the moment he scorns his inconvenient nephew Simba and sneers, “Shall I curtsey?!”

Kuja, on the other hand, represents…I don’t know, glam rock’s invisible yet pervasive influence on Japan? In Final Fantasy IX Kuja is an extraterrestrial arms dealer trying to trigger an apocalyptic global war, but his costume instead makes it look like his ultimate objective is to be the next Lady Gaga.

Admittedly it’s a close call, but I have to call it for Scar.  Kuja’s got the dress, but Scar is an out-and-unashamed metrosexual lion.  Plus we know he’s the real protagonist of The Lion King. 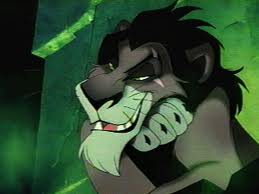 Not only is Pocahontas‘ villain Governor Ratcliffe a fancy boy, but he even has an effeminate animal sidekick, a dog named Percy. That’s a new height for any of the villains on this list. Plus he gets his own song with the lyric, “Think how they’ll squirm when they see how I glitter!” 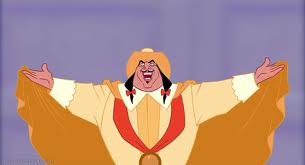 By rights he should win, and yet…there’s Seymour, who in Final Fantasy X is basically an evil Pope as envisioned by David Bowie’s Goblin King …

The real scandal isn’t that Seymour is an undead being (who gets beaten up by your party every two hours) or that he serves a corrupt Church that is complicit in a cycle of mass murder carried out ritualistically at the behest of a literally mindless spirit, but that at least 40 percent of the tithes paid to the Church goes to Seymour’s hair.

I mean, I’m sure Radcliffe leads a pricey, lavish lifestyle, but Seymour wins simply because his annual hair care budget surpasses the GDP of some small countries.  Truly that makes him the maester of metrosexuals, and in the world of Spira which includes girly frat boy Tidus that’s quite an accomplishment.

Disney put in some strong contenders in the early-mid ’90s, but the award goes to the Final Fantasy franchise.

Our Western sensibilities just couldn’t compete with a franchise from a culture that has formed entire genres out of having men with ambiguous sexualities and androgynous genders.

2 thoughts on “The Most Effeminate Male Villain: Final Fantasy vs. Disney”