It’s come to my attention that certain people have called into question the scientific rigor of this blog, and in fact the entire field of “trash culture studies,” so to deal with the ever persistent issue of genre elitism I’ve turned away from comics and video games toward the world of literature.  Thus on today’s docket we have… 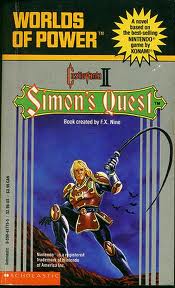 Except for “Choose Your Own Adventure” books, I can’t think of any trash culture reading materials that were more ubiquitous among my generation.  The “Worlds of Power” books were designed by Seth “F.X. Nine” Godin and his shadowy legion of ghostwriters for one reason:  to make money, obviously, but also I think they were a sincere attempt to get young gamers into reading.  Honestly, at the time, it wasn’t a bad idea.  Nowadays, no matter what the snobs say, video games have for the most part come into their own as a storytelling medium.  It’s arguably futile to translate something like Final Fantasy VII or Silent Hill 3 into literature, since games like those are able to convey narratives on their own and those narratives are intertwined with, say, the dread that comes from exploring the “Otherworld” or the sense of determination the player might feel in facing Sephiroth after hours of seeing Cloud tortured in nearly every possible sense by the villain.

In the case of Castlevania II and most of the other console games around when the “Worlds of Power” books were published, they were still largely blank slates.  Not counting the occasionally epic sagas you might find in a game’s instruction manual, what stories games of that time had were pretty much just excuses to get you from point A to point B.  Granted Castlevania II did have one of the more interesting, if not bizarre, premises out there.  See, you play Simon Belmont, fresh off slaying Dracula in the original Castlevania.  Unfortunately, Dracula managed to curse Simon, condemning him to an early (and presumably unpleasant) death and to be hounded by zombies every night.  The only way to save himself is to collect the remaining body parts of Dracula, use them in the ruins of his own castle to resurrect him, and destroy him once again.  Even as a kid, the plot kind of bothered me, since it basically meant that Simon was willing to risk unleashing Dracula and his undead hordes upon the world yet again just to save his own ass.  On reflection, though, that did give even the vague plot a kind of edginess, a gray hue, that was lacking in the era.  Undoubtedly Castlevania II is the least popular of the three Castlevania games released on the NES (even Konami agreed, if the fact that they ditched Castlevania II’s adventure game elements – keeping them ditched until the Playstation era – and went back to the original recipe for III is any indication), but because of its premise alone it’s probably also the ripest for an ambitious, ground-up remake (of course you can always count on hardcore fans with way too much time on their hands to pick up where the actual copyright holders have dropped the ball).

All this to say, I know that the Worlds of Power books are written for a middle school audience, and even then they are to The Hunger Games what ibuprofen is to crack (or is that the other way around?).  But of course a really young target audience and being a franchise cash-in might mean the odds are a billion to one that it would be any kind of a classic, but it could still be good or at the very least a little fun.  After all, Castlevania is one of the classic video game concepts, and like I wrote above Castlevania II has one of the most interesting premises of the 8-bit era, so it would actually take more effort to screw things up than write a halfway decent story, especially since the actual games’ creators have already done all the heavy lifting for the writer.  It’s not even like the ghostwriter would have to do that much research, so…!

“I will drink your spirit like cherry pop!” said the count, flapping his cape and showing his fangs.  “Yes, Simon Belmont!  You will become one of my children of the night!”