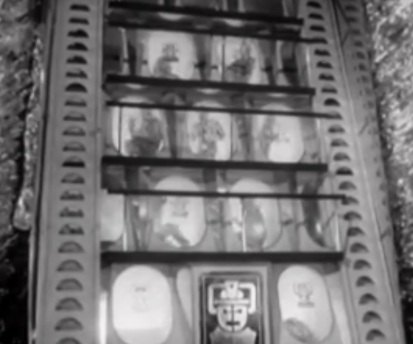 A group of archaeologists from Earth are trying to find an entrance into a Cybermen city on the planet Telos.  The Doctor, Victoria, and Jamie show up just after one member of the expedition is electrocuted to death while trying to open a gate. Klieg, who is funding the archaeologists, guesses that the Doctor is leading a rival expedition, which the Doctor doesn’t really deny. Klieg and his colleague Kaftan are apparently eager to keep the credit for themselves, since the Cybermen were wiped out five hundred years ago after a war with the human race and few traces are left.  Still, Professor Parry, the leader of the expedition, convinces the team to accept the Doctor’s help.  Afterward the Doctor leads everyone safely inside and discovers that the city has sections that have to be opened by solving logic puzzles.  Since apparently the horror genre doesn’t exist in the distant future, the archaeologists decide to split up. Victoria and Kaftan discover the device the Cybermen used to rejuvenate themselves.  Jamie sees an inert insect-like robot, the Cybermat, on the floor.

Elsewhere, the Doctor warns Klieg not to reactive the city’s main power source – but can’t help but assist Klieg in solving the binary sequence needed to do so.  Parry and Klieg find that, even with the power restored, one door in the control room remains sealed. Parry hypothesizes that behind it is the rumored “tomb of the Cybermen” where their records are kept. Victoria gets trapped in the rejuvenation device and Kaftan sadistically experiments with the control panel while Victoria is still inside, until the Doctor stops her and figures out how to free Victoria.  The archaeologist accompanying Jamie is accidentally killed when they trigger a weapon testing room.  After this last death, Parry decides to leave, despite the objections of Klieg, but they learn that their ship has been sabotaged and can only be repaired in 72 hours. Meanwhile the archaeologists complete the sequence that opens the last door, which leads to a sub-zero chamber containing the Cybermen’s tomb.  Kaftan stays behind and the Doctor, suspecting that she and her burly servant Toberman had something to do with the ship’s sabotage, asks Victoria to watch her. Unfortunately, Kaftan drugs Victoria’s coffee and, once she’s unconscious, seals the door. Pretending that he’s trying to open the door, Klieg enters a sequence at a control panel that begins to revive the Cybermen.  An archaeologist tries to reverse the process, but Klieg shoots him to death and reactivates the panel. Klieg explains to Parry that he represents the Brotherhood of Logicians, a society of intellectuals who hope to obtain the technological secrets of the Cybermen in exchange for resurrecting them.  Victoria awakens and tries to open the door.  However, Kaftan takes her hostage with a gun. When the Cybermat attacks and knocks out Kaftan, Victoria grabs her gun and destroys the Cybermat.

The revived Cybermen grimly walk past the archaeologists and the Doctor to open a chamber containing their leader, the Cyber Controller.  Klieg talks to the Cyber Controller and tries to negotiate a deal, who only replies, “You belong to us. You shall be like us.”  The Cyber Controller reveals that the city was designed to attract and only be accessible to logical minds, the sort the Cybermen would want to “recruit” to restore their species. The Cyber Controller recognizes the Doctor as the one “responsible” for the destruction of Mondas, but still admires his intelligence.  However, the Controller “nominates” Klieg to be converted and made into their new leader, promising, “You have fear.  We will eliminate fear from your brain.” The Controller announces that the rest will be frozen in the tomb for future use. Despite the efforts of a revived Kaftan, Victoria and the ship’s pilot open the hatch. The pilot uses a smoke bomb to help the archaeologists, the Doctor, and Jamie escape from the tomb, although Toberman is ultimately captured. Trapped in the tomb, the Cybermen send Cybermats into the upper chambers, while the others decide to imprison Klieg and Kaftan in an isolated chamber.

The Doctor comforts Victoria, who is still missing her father, but soon after the Doctor, Jamie, and Victoria are interrupted by the Cybermats.  The Doctor destroys them by electrifying the floor, but a bigger threat is just around the corner:  Klieg and Kaftan armed with Cybermen weaponry that they discovered.  Klieg hopes to use the weapons to force the Cyber Controller into compliance and locks the Doctor and the others outside the main control room after taking Victoria prisoner.  However, the Cyber Controller and a partially converted Toberman turn the tables, attacking Klieg and killing Kaftan. Yet the death of Kaftan at the hands of the Cyber Controller shakes Toberman from his brainwashing, and he attacks and seemingly destroys the Controller. The Doctor enlists Toberman into helping him freeze the tomb again, but Klieg appears. In a scuffle between the Cybermen and the Doctor, Jamie, and Toberman, Klieg is killed by a Cyberman and the Doctor and Toberman succeed in putting the Cybermen back into deep freeze.  The Doctor scrambles the logic puzzle that opened the entrance to the tomb and electrifies all the entrances. When the Controller appears to have lived and tries to escape the city, Toberman willingly electrocutes himself to death to seal the main gate.  As the Doctor, Victoria, and Jamie leave for the TARDIS, a sole Cybermat crawls across the surface of Telos.

The Doctor:  The power cable generated an electrical field and confused their tiny metal minds!  You might almost say that they had a complete metal breakdown.
Jamie:  *groan*
The Doctor:  I’m so sorry, Jamie.

The Doctor: No, Jamie. Don’t you see? Don’t you see what this is going to mean to all the people who come to serve Klieg  the All-Powerful? Why, no country, no person, would dare to have a single thought that was not your own! Eric Klieg’s own conception of the…of the way of life!
Klieg: Brilliant! Yes! Yes, you’re right! Master of the world!
The Doctor: Well, now I know you’re mad. I just wanted to make sure.

After the footage of this serial was rediscovered in 1991, this is now the first Second Doctor serial that survives in its complete form.

The Doctor tells Victoria he invented the TARDIS.  Of course, I’m sure this is just because the writers hadn’t thought that far ahead, but you could just say he’s lying to impress Victoria.

The Doctor tells his age for the first time after lots of vague hints that he’s very old indeed:  “Well, if we counted in Earth terms, I suppose I must be 400…yes, 450 years old.”

Right after the not so permanent departure of the Daleks in Evil of the Daleks, we get an episode designed to have the Cybermen take the Daleks’ place as the Doctor’s number one threat.  That said, first I should address the politically incorrect elephant in the room:  Toberman.  A tough, silent, and intellectually backward black man is an uncomfortable sight, even if you don’t know the history of the pulp archetype of the “exotic” muscular henchman.  Now it is true that the script called for Toberman to be deaf, which may help excuse some of the parts of his character, but even if you are not the type of person to take offense at these things, it does cast a bit of a damper on the proceedings.

That said, this serial is remembered as a classic, a reputation that might have been amplified undeservedly by its once “lost” status. However, I won’t dispute its reputation too much.  But ironically once the Cybermen actually show up the story trips up a bit, losing much of the sense of menace and claustrophobia that began with the archaeologists going into the city.  The best “classic” Who is built on high-concept, irrepressible ideas that transcend the low budgets, but while this one has on the face of it a very workable premise it seems to actually skirt going in interesting directions – like making the all too human megalomaniac Klieg a Cyber Controller.  Its biggest legacy probably is that it introduces the idea of the Cybermen being able to in the most literal way “convert” people to their cause, but even that concept is barely used in the story itself, with Toberman shaking off their mind control after just half an episode.

Also it’s not as good as Evil of the Daleks…but what is?